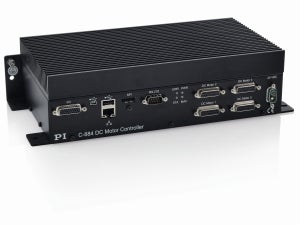 The new C-884 motion controller from PI permits a vector movement of positioning systems with DC motors in four axes.
The four motor axes are addressed synchronously, start simultaneously and reach the target position at the same time.
Commands are given to the controller over a USB or TCP / IP interface, the encoder bandwidth is 50MHz.

The C-884 has a dual-core architecture with a command interpreter, which runs on an ARM processor core under a Linux operating system, separately from the digital signal processor (DSP). This simplifies the programming of positioning systems in automation environments which follow a special industry or laboratory standard or a manufacturer-specific device standard.

The four axis motion controller comes with additional functions and an extensive software package: Nested stacking commands can be executed with the macro function following a command or external trigger, even without connection to the host PC. A data recorder records operating data such as motor voltage, velocity, position or position errors, which can then be displayed on the graphical user interface of PIMikroMove.

The user software PIMikroMove facilitates faster start-up as well as clearer and easier operation of controller and positioning system: It is possible, for example, to record a settling process with the data recorder and to display it on PIMikroMove. The user can then modify the PID servo-control parameters until an optimum settling behavior is achieved.

Software support for LabVIEW and shared libraries for Windows and Linux are also included in the scope of delivery of C-884.