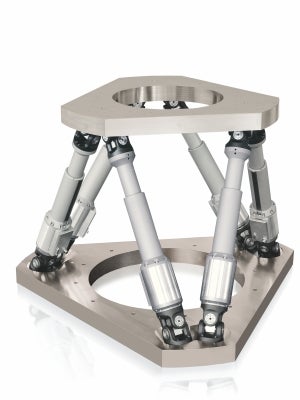 PI presents a modular concept for six-axis positioning systems. Due to its modularity, the high-precision parallel kinematics can be adapted fast and efficiently to customer requirements.

The six identical Hexapod struts are designed such that their length can be easily scaled. They include the required electronics for reference point switches, limit switches, position sensors and electronic commutation for the brushless DC motors. Their standardised joints allow them to be combined with almost any base plate and top, whatever type of geometry.

The pre-configured Hexapod system H-845.D11 provides travel ranges of up to 220mm in the XY plane and up to 100mm in Z direction. The maximum tilt and rotation angle is ±30°. At present, the modular Hexapod positions loads up to 1,000kg with horizontal orientation and a velocity of up to 20mm/s. The position resolution of a single strut is 40µm and the linear repeatability approximately 2µm. When mounted in any other orientation, up to 400kg can be precisely aligned.

A powerful digital controller completes the system: it features vector control, a stable pivot point freely selectable in space and LabVIEW support. Position values can be simply entered in Cartesian coordinates. Control of two additional motorised axes is also available as an option.