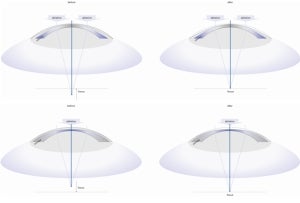 Human beings are visual animals, in other words, they acquire most information visually. It is therefore no wonder that vision is very important. Vision defects have been corrected with optical glasses since the 13th century. The first clinical studies investigating surgical methods to "shape" the cornea started in the 1930s. Today, different laser methods have become established that correspondingly influence the curvature of the cornea to correct visual acuity.

They all have one decisive factor in common: laser beam control and focusing that requires high-precision positioning systems. Piezo-based solutions usually have an advantage here. They work with the necessary precision, are fast, reliable, and can be integrated well in today’s laser systems due to different and compact designs.

Nowadays, ametropia can be corrected in up to high diopter ranges thanks to refractive operation techniques. For this purpose, the shape of the cornea is modeled in the optical axis by removing small cornea particles with laser beams so that the resulting refractive power of the cornea (epithelium) matches the length of the eyeball again (see image).

With Epi-LASIK (Epithelial Laser In Situ Keratomileusis), the epithelium is first prepared with a microkeratome (mechanical preparation scalpel) or a laser. The resulting thin corneal flap is then lifted to the side. The top cell layer of the cornea in the treatment area can also be removed using a small special instrument in the form of a scraper (PRK = photorefractive keratectomy). In the case of so-called LASEK (Laser-Assisted Sub-Epithelial Keratomileusis), the surface of the cornea is perforated with a "scratch ring", then briefly moistened with a weak alcohol solution for ablation and carefully pushed to the side by hand. Only then does the actual laser treatment take place.

Two different laser types are used for these refractive operations: excimer lasers and femtosecond lasers. The latter work in the infrared range and send light pulses with a duration in the femtosecond range (one femtosecond is 10s-15s). The laser energy is not discharged on the surface of the cornea but inside at a predetermined depth and for a duration of several femtoseconds. In this way, tissue can be cut with extreme precision and practically without generating heat. This is used, e.g., in the above-mentioned LASIK method to remove the thin corneal flap. Femtolasers can also be used to prepare corneal tunnels for intracorneal implants, e.g. for artificial lenses.

The femtolaser does not correct the ametropia, however. This is done by excimer lasers. They send UV light, whereby the energy of the laser beam is discharged directly on the surface of the cornea. The laser beam only penetrates a micrometer-wide tissue layer of the cornea and vaporizes the tissue there. The cornea is shaped very precisely so that myopia, hyperopia, or astigmatism can be corrected. Therefore, the precise positioning of the laser beam or the fast and precise control of the laser beam is extremely important for the two lasers used. When the excimer laser is used, an eye tracker integrated in the system monitors the position of the eye and correspondingly adjusts the placement of the light beam with a reaction time of less than 10ms. The laser also has to be correspondingly guided for this as well.

Common deflection techniques such as the galvanometer scanners, which are usually based on the induction principle, are in principle suitable for such high-precision applications on the human eye, but also have disadvantages. To be able to position in two axes, two systems have to be switched in succession, in other words, they have to be stacked. This results in different pivot points and the space requirement is relatively large.

Piezo-driven tip/tilt mirror systems are the better alternative here since they not only offer the required accuracy but also compact dimensions, high accelerations, and a great dynamic bandwidth at the same time as well. The Karlsruhe-based company PI has been an acknowledged specialist in this area for many years, offering a whole series of different solutions for applications in ophthalmology that not only cover the special requirements in this field but can also be easily integrated in the laser systems as well. They allow an optical deflection area of up to 120mrad, extremely fast response behavior (10ms to 1ms with mirror) as well as position resolutions into the nanoradian range.

Piezo actuators are the driving force behind these one, two or three-axis systems. Actuators exploiting the piezo effect move with resolutions in the subnanometer range, with high dynamics and scanning frequencies of up to several thousand hertz. The motion is based on crystalline effects and so there are no rotating parts, neither is there any friction; piezo actuators are therefore practically maintenance-free and nonwearing. To the electronics, piezo actuators present capacitive loads and dissipate no power in static operation. In tip/tilt mirror systems they act on the mirror platform directly or via flexure joints. Since no intermediate elements such as drive screws or gearheads are used, they are backlash-free.

In the case of tip/tilt mirror systems with several motion axes, piezo drives are used in parallel kinematics positioning systems. This structure has various advantages over serial systems: for example, there is only one moving platform with a common pivot point, the dynamics are higher and the size is smaller. In addition, the systems achieve a higher linearity than can be realized by switching two single-axis systems – galvanoscanners, for example – in succession. Integrated high-resolution position sensors ensure high linearity values of better than 0.25% over the full travel range and a repeatability of typically 5µrad.

The ceramic PILine® ultrasonic motors also open up interesting possibilities for laser beam control. They are characterized by extremely high velocities and acceleration with simultaneously very compact dimensions. The patented drive principle makes them self-locking when at rest. Linear motors and drives are intended for integration in a customer system and are generally unguided. There are also complete solutions, however, that can be integrated ready for installation in many applications. The M-663 precision micro linear stage, which is also suitable for XY combinations if necessary, is a good example of this.

It offers velocities of up to 400mm/s and travel ranges up to 19mm with resolutions up to 0.1µm. A contactlessly measuring optical linear encoder guarantees high linearity and repeatability. In addition, no reference move is necessary after a standstill. With a height of 15mm, a width of 30mm and a length of 35mm, the micropositioning stage is very compact and can therefore be easily integrated in the respective application. This is also certainly due to the fact that the same manufacturer also provides matching drive electronics and controllers, which are perfectly adapted to the micropositioning stage. Such positioning solutions create interesting possibilities for laser beam control and focusing that benefit patients as well.