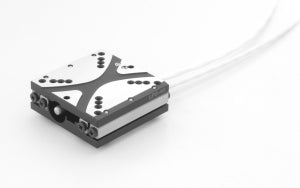 PI miCos has extended its LPS series of linear positioning stages. The drive arrangement of the new, compact LPS-45 stage series is based on a piezoelectric inertia drive.

Using only minimal space, these linear positioning stages provide a combination of high force and high positioning accuracy that cannot be achieved with conventional drive arrangements, such as DC and stepper motors. LPS-45 stages provide a holding force or maximum driving force of 10N and have a maximum velocity of 10mm/s.

The LPS-45 features a compact design and precision components such as crossed roller guides with a cage assistant system, providing for ultra-straight motion with less than 100µrad. The length measuring system, an optical linear encoder, has a resolution of 1nm. Just like the motor, it is positioned centrally between the guides. Due to the high resolution and positioning stability of the piezo motor, minimum incremental motion can be achieved in the range of the encoder resolution. Thanks to the piezomotor’s high degree of self-locking, the position control of the stage only requires little current so that the motor does not heat up. The piezoelectric inertia drive is operated at 45V and a frequency of 23kHz and runs almost noiselessly.

The position control has been designed for fast point-to-point motions, using the E-871 motion controller. The control is digitally addressed over a USB or RS-232 interface and features numerous parameters for optional optimisation of the settling behavior. As a result of its networking capability, up to 16 axes can be controlled simultaneously via one computer interface. For laboratory applications, the E-871 controller supports LabView. Additional libraries for Windows and Linux enable an implementation in existing environments.

Areas of application for the LPS-45 series

The drives of the LPS-45 series are suitable for applications with small operating cycles and limited installation space. Piezomotors are generally vacuum-compatible; also the LPS positioning stages are designed for operation in ultrahigh vacuum environments with up to 10-9hPa. PI miCos is expanding its range of positioning systems with piezomotors, especially for use in laboratories and for beamline instrumentation. The LPS-45 is currently integrated a parallel-kinematic SpaceFAB design.