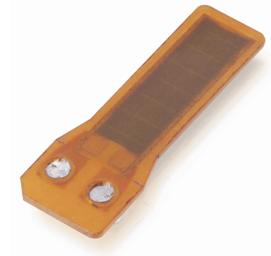 The new P-878 DuraAct Power piezo patch transducer from PI Ceramic uses an operating voltage of only -20V to 120V, and is the only one of its kind on the market.

As all previousDuraAct transducers, the P-878 can be used as piezo actuator, sensor or energy harvester. The active layer of the patch transducer consists of a multilayer piezo element that is embedded in a fibre-reinforced plastic with a patented method.

For displacement, the DuraAct Power uses the d33 effect.

The composites are manufactured with a bubble-free injection method. Their polymer coating simultaneously serves as electrical insulation and as mechanical preload, which makes the P-878 bendable.

Previous all-ceramic transducers require high driving voltages of 250V to 1,000V. They use lateral contraction of the piezo element when applying the electrical voltage, the so-called transversal or d31 effect.

In contrast, DuraAct Power multilayer patch transducers use the longitudinal or d33 effect, which describes an elongation parallel to the electric field E and the polarisation direction of the piezo actuator.