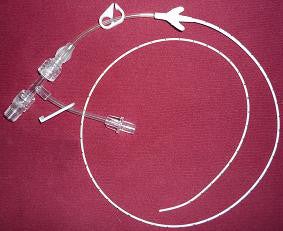 US-based AngioDynamics has announced that its distribution partner, Medcomp, has received Health Canada approval for the Celerity tip location system, designed to be used as an alternative to chest X-ray and fluoroscopy for peripherally inserted central catheter (PICC) tip placement in adult patients.

The Celerity tip location system uses ECG, rather than chest X-ray and fluoroscopy to confirm the location of a PICC in adult patients.

A PICC is a form of intravenous access that can be used for extended periods of time usually for long chemotherapy regimens, total parenteral nutrition or extended antibiotic therapy.

PICCs are inserted by physicians in a peripheral vein in the arm used in both the hospital and community settings.

In January 2013, AngioDynamics entered into a non-exclusive, global distribution agreement with Medcomp for the Celerity tip location system.

While the distribution of the Celerity system is expected to begin next month in Canada, it is still under regulatory review in the US and in Europe.

"We believe the combination of the Celerity system with our market-leading, thrombus-resistant BioFlo technology may provide unparalleled clinical and economic advantages, and has the potential to become the gold standard in the PICC market."

"We believe the combination of the Celerity system with our market-leading, thrombus-resistant BioFlo technology may provide unparalleled clinical and economic advantages, and has the potential to become the gold standard in the PICC market," Greiner said.

Previously, AngioDynamics has also received 510(k) approval from the US Food and Drug Administration (FDA) for its Xcela Plus Port family with Pressure Activated Safety Valve (PASV) and IDE approval to carry out a clinical study of the NanoKnife system for the focal ablation of prostate cancer.

AngioDynamics is engaged in the development of medical devices used by interventional radiologists and cardiologists, surgeons, as well as other physicians for the minimally-invasive diagnosis and treatment of cancer and peripheral vascular disease.