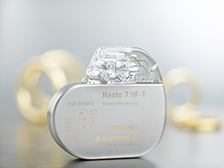 The Ilesto 7 series, which the company claims include the world's smallest ICDs, feature the company's ProMRI technology, which enables access to potentially life-saving MR scans.

"With Ilesto 7 I can ensure that my patients will have access to the gold standard of soft tissue imaging when needed -- even with an ICD or a CRT-D," Erne said.

"The Ilesto 7 series, as well as many other BIOTRONIK devices, boasts ProMRI capability and BIOTRONIK's Home Monitoring technology.

"With this, we have the opportunity to offer our patients the most advanced and reliable ICD and CRT-D therapy, an enhanced quality of life, and an opportunity to live as normal a life as possible."

Featuring an optimised shape, the device's new DF4 connector also provides various important benefits for both physicians and patients, according to the German-based company.

The company is planning to launch the Ilesto 7 series in the European market in mid 2013.