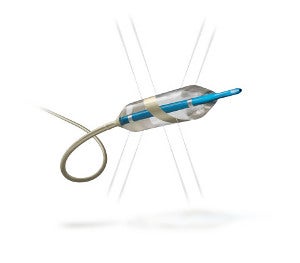 Healthcare products company Covidien has introduced an over the wire balloon-based irrigated catheter device to treat patients who are resistant to medical management of hypertension.

The CE-marked device, OneShot Renal Denervation system, is implanted under the skin for delivering radiofrequency energy in a circumferential manner to the renal arterial wall as well as restoring the damaged blood vessel caused due to the high force of blood.

Mercy Angiography medical director Dr John Ormiston said that between 10% to 15% of the population with hypertension do not respond to medications and are deemed a resistant or refractory hypertension patient.

"These patients are expected to benefit from OneShot, which offers a solution with a much shorter procedure time than with currently available solutions. This could translate into much less pain for patients," Ormiston added.

"Between 10% to 15% of the population with hypertension do not respond to medications and are deemed a resistant or refractory hypertension patient."

During the company’s Renal Hypertension Ablation System (RHAS) feasibility study, the device has showed a mean reduction of 42mmHg at six months in eight patients.

The device is also being studied as part of Rapid renal sympathetic denervation for resistant hypertension using the OneShot system (RAPID) trial, a 50-patient study currently enrolling in Europe and New Zealand, with expected enrolment completion in the early spring of 2013.

OneShot system will be made available in Europe, the Middle East, Africa, Asia and Latin America in the coming months, according to the company.