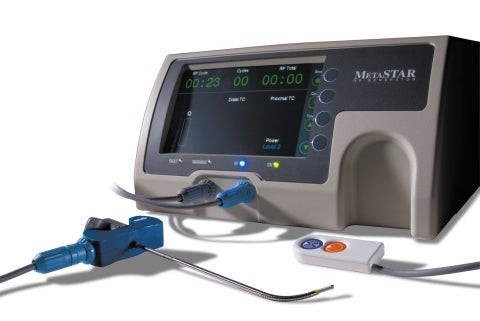 Dfine, a radiofrequency-based medical device manufacturer, has introduced its small steerable Star tumor ablation system in the US, which is designed for the palliative treatment of painful metastatic spinal tumors.

Real-time information about the ablative process throughout the procedure will be provided to physicians through temperature monitors located within the SpineSTAR ablation system.

Patients and physicians also have the ability to use the Star tumor ablation system to reduce the size of metastatic spinal tumors in a single minimally invasive RF ablation procedure, thus providing rapid pain relief, according to the company.

Eisenhower Medical Centre interventional radiologist Dr Jerry Chang said the centre is satisfied with the results it has achieved with the Star tumor ablation system.

"Patients who were in severe pain have experienced significant pain relief and have been able to return to a better quality of life almost immediately following the procedure," Chang said.

"Not only is it possible to achieve rapid pain relief with t-RFA, but it is also compatible with systemic therapies to treat the primary cancer, including both chemo and radiation therapies."

Dfine CEO Kevin Mosher said the company is encouraged by the support Star has received from the interventional radiology and oncology communities.

"The full commercial launch represents a key milestone for Dfine, as it fulfills the vision of extending our technology platform with a second procedure to serve the large population of patients suffering from painful spinal metastases," Mosher said.