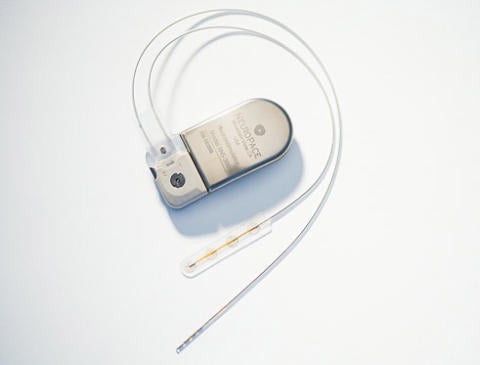 NeuroPace has obtained US Food and Drug Administration (FDA) premarket approval for its NeuroPace RNS system, an implantable therapeutic device that utilises responsive neurostimulation to monitor and interrupt abnormal electrical activity in the brain before a seizure.

Approval was granted for treatment of partial onset seizures that have not been controlled with two or more antiepileptic medications in individuals 18 years of age or older.

The RNS system is the first closed-loop responsive brain stimulation system and consists of a small neurostimulator implanted within the skull under the scalp. The neurostimulator is connected to electrodes that are placed near the patient’s seizure focus.

It delivers a small amount of electrical energy to disrupt abnormal brain activity before it gets out of control.

Physicians can programme the detection and stimulation parameters of the implanted RNS system non-invasively to customise therapy for each individual.

FDA approval is backed by a three-month randomised control trial of 191 patients with drug-resistant epilepsy.

The FDA accepted the company’s PMA application in November 2010 based on data from the pivotal study.

NeuroPace CEO Frank Fischer said the company believes the RNS system has the potential to provide substantial improvement in quality of life to epilepsy sufferers who are unable to control their condition with medication.

"We anticipate that physicians will be able to make this breakthrough therapy available to eligible patients in the very near future."

"We anticipate that physicians will be able to make this breakthrough therapy available to eligible patients in the very near future," Fischer said.

A total of 256 patients have been implanted with the RNS system, and more than 1,200 patient years of experience with responsive stimulation have been accumulated to date.

According to statistics provided by the Epilepsy Foundation, epilepsy affects nearly three million people in the US.

Approximately 40% of epilepsy patients are severely affected and continue to experience seizures despite treatment.