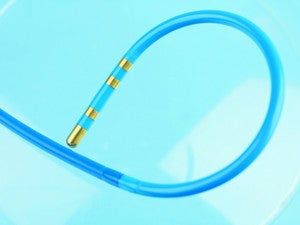 The study, conducted at the Budapest University of Technology and Economics in partnership with Erasmus Medical Centre, was designed to compare the ablation time efficiency of the gold catheter with a 4-mm, nonirrigated, platinum-iridium catheter.

The study found that the gold-tip catheter can create lesions within 40 seconds, while standard catheter takes 60 seconds, without compromising patient safety.

The results also demonstrated no difference in tip temperature due to the temperature-controlled settings, but a considerable difference was observed in the mean power delivery.

Because the gold alloy possesses thermal conductivity that is four times higher than the platinum-iridium used in conventional catheters, it allows greater energy delivery with a lower tip temperature, according to the company.

"As soon as the tip temperature reaches the programmed maximum, the generator automatically decreases the power delivery," Szili-Torok said.

"Gold-tip catheters, however, result in an increased energy transfer into the tissue, so the tip temperature is lower even though energy delivery is higher.