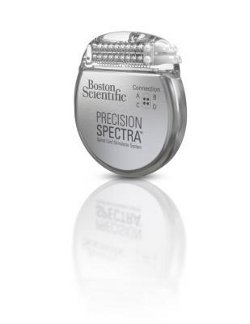 Medical device manufacturer Boston Scientific has announced the limited launch of its spinal cord stimulator (SCS) system in the US, designed for the treatment of chronic pain.

The Precision Spectra SCS, which the company claims is the world’s first and only device with Illumina 3D software and 32 contacts, features an implantable pulse generator that delivers electrical pulses to leads with stimulating contacts.

The programmable software embedded in the device is based on a proprietary computer model that takes into account 3D anatomical structures, including the conductivity of the spinal cord and surrounding tissue, said the company.

The software is expected to improve control of the stimulation field by creating a customised stimulation to mask pain signals travelling to the brain.

To further understand the needs of chronic pain patients, the company initiated a prospective, multicentre, single-arm OPTIONS trial to characterise the benefits of having a 32-contact option in the Precision system.

"The software is expected to improve control of the stimulation field by creating a customised stimulation to mask pain signals."

Another trial, including a cross-sectional, multicentre MAP study, will estimate the prevalence of multiple areas of pain in SCS-eligible patients with certain diseases.

In addition, the company has introduced Precision Plus SCS System for head-only MRI use and peripheral nerve stimulation, Vercise Deep Brain Stimulator system for Parkinson’s disease and Infinion 16 Percutaneous SCS Lead in the US and Europe.