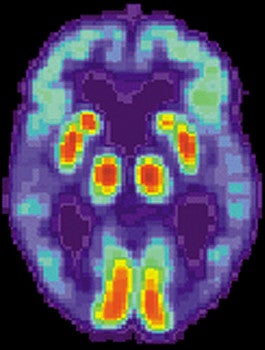 GE Healthcare has announced the US Food and Drug Administration (FDA) approval for Vizamyl (Flutemetamol F18 injection), a radioactive diagnostic drug, for use with positron emission tomography (PET) imaging of the brain in adults being evaluated for Alzheimer’s disease (AD) and dementia.

The radioactive diagnostic agent allows the visual interpretation of colour images rather than black and white assessment.

According to GE Healthcare, Vizamyl works by attaching to beta amyloid and producing a PET image of the brain that is used to assess the presence of beta amyloid.

A negative Vizamyl scan indicates that there is little or no beta amyloid accumulation in the brain and the cause of the dementia is probably not due to AD, while a positive scan points to the likely presence of moderate or greater amount of amyloid in the brain, but does not establish a diagnosis of AD or other dementia.

FDA has approved Vizamyl based on the review of pivotal and supportive data from a series of clinical trials, including Phase III brain autopsy and biopsy studies.

The most common adverse reactions reported in clinical trials include flushing, increased blood pressure, headache, nausea and dizziness, and occurred at rates 2% or less.

According to the company, the safety of Vizamyl was established in 761 participants.

"We hope that Vizamyl will help advance treatment options by helping to enroll the right people into the right clinical trials, which may lead to disease-modifying medications."

"We hope that Vizamyl will help advance treatment options by helping to enroll the right people into the right clinical trials, which may lead to disease-modifying medications," Murphy said.

Vizamyl is being manufactured by Medi-Physics for GE Healthcare and will be commercially available in 2014.

In 2012, the FDA had approved Amyvid (Florbetapir F 18 injection) to help assess adults for AD and other causes of cognitive decline.