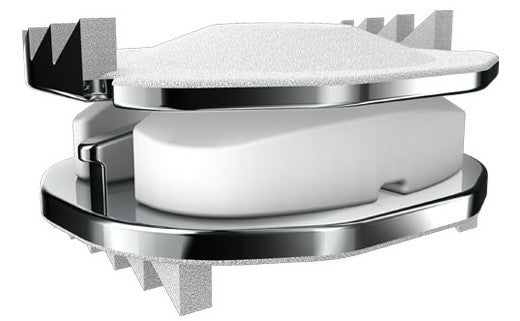 "It is very gratifying to know that spine surgeons can now offer this new, evidence-based treatment option to their two-level surgical candidates," Lavigne said.

Mobi-C is reportedly the first artificial cervical disc approved by the FDA for multi-level indications of degenerative disc disease in the US.

It is a cobalt chromium alloy and polyethylene, mobile-bearing prosthesis designed as a bone-sparing, cervical intervertebral disc replacement.

In addition, the device offers surgeons a simplified surgical technique compared to other traditional devices.

"It is very gratifying to know that spine surgeons can now offer this new, evidence-based treatment option to their two-level surgical candidates."

Mobi-C cervical disc demonstrated statistical superiority for two-level use as compared with fusion control treatment based on the primary endpoint analysis in multi-center clinical trials.

In addition, the efficacy of Mobi-C was proven in the two-level arm of the investigational device exemption trial, where it demonstrated superiority in overall trial success compared to standard options like anterior cervical discectomy and fusion for treating cervical degenerative disc disease.

GMBC director of neurosciences in Baltimore, Maryland Dr Reginald Davis noted the study data supporting the FDA approval for Mobi-C represents Level I evidence, the highest level of data classification achievable in the field of Evidence Based Medicine.

Mobi-C has the room to make a significant and positive impact in the treatment of one or two-level cervical disc disease as the patient population is large.

According to GlobalData estimates artificial disc replacement market in the US, which was valued at $220m in 2012 is expected to grow at a CAGR of 10% to reach $430m by 2019.

View All
View All
News