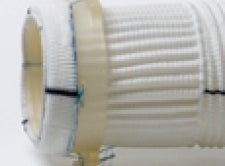 It is designed to be used in combination with Sorin’s Mitroflow aortic pericardial heart valve.

The Mitroflow Valsalva Conduit is reportedly the only aortic root surgery system currently available in the market with bovine pericardium valve.

In addition to Mitroflow’s excellent haemodynamic performance and proven long-term durability, the system offers cardiac surgeons with a solution for replacing simultaneously the ascending aorta and the diseased aortic valve in a single procedure.

The Mitroflow graft, which is impregnated with absorbable bovine cross-linked gelatine for eliminating the need for preclotting, also replicates the native sinus, preserving the patient’s physiological haemodynamics and obviating the need for lifelong anticoagulation treatment.

The implant was performed by Professor Roberto di Bartolomeo, chief of the cardiac surgery department at Sant’Orsola-Malpighi Hospital, Bologna, Italy.

Introduced in the US at the end of 2012 following the US Food and Drug Administration (FDA) approval, the Mitroflow Valsalva Conduit has recently received CE mark and is now commercially available in Europe.

"We are very pleased to extend Mitroflow Valsalva Conduit’s commercial availability in Europe and thus allow a larger patient population to benefit from this unique reconstructive technology," Darnaud said.

Travel Vaccines: A US and European Perspective