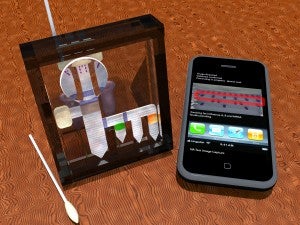 The University of Washington (UW) has secured a fund of $9.6m from the US Department of Defense’s Advanced Research Projects Agency to develop a small, paper-based medical device that can diagnose infectious diseases.

This device would be helpful in developing countries where diagnostic capabilities are limited.

The fund has been awarded to UW as well as its partners General Electric Global Research; Seattle-based Epoch Biosciences, a global health nonprofit PATH; and Seattle Children’s.

UW bioengineering department professor, chair and lead researcher Paul Yager said that the test will be inexpensive, simple to use and robust enough that people could use it in their homes.

The disposable device could be activated when a patient takes a nasal swab.

It would look for the DNA or RNA of a particular set of pathogens in the body fluid sample and in case any one or all of the pathogens are present, a pattern of dots would appear on the test paper within an hour.

With the help of a smartphone, patients can take a picture and show the results to a physician for a diagnosis.

"There are a lot of cell phones now in the developing world, so you could test and receive a diagnosis in places where there aren’t any medical testing facilities," Yager added.

In 2011, the university initially received a fund of $4m to commence the project.

During the second phase of funding, which will last for 18 months, researchers plan to develop a usable prototype.

Initially, the paper-based pathogen identification test will target methicillin-resistant Staphylococcus aureus (MRSA) bacteria that is infectious as well as resistant to antibiotics and, later, researchers plan to develop the device to run tests for the influenza virus, and possibly sexually transmitted diseases.

Image: This simulation shows the pieces necessary for a field-based diagnostic test, including a swab, a smartphone and the testing device. Photo: Courtesy of Paul Yager, U of Washington.