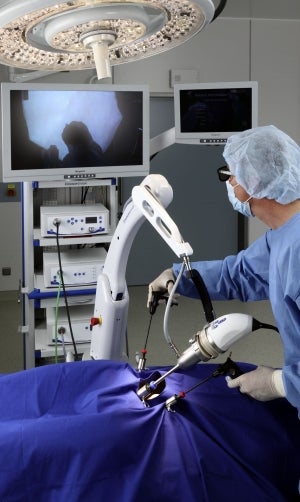 Patient-friendly minimally invasive interventions, for example in laparoscopies, are not conceivable without high-resolution imaging systems. Two-dimensional, i.e., area-based, insights into the body have been an established practice in endoscopy for many years. Three-dimensional images, such as the ones known from the movies, had not been possible for the surgeon for a long time.

For some years, a clear change has been observed in this area; 3D technology has found its way into endoscopy, helping optimize laparoscopic interventions. Live images true to detail, corresponding to natural three-dimensional viewing, enable better hand / eye coordination, prevent signs of tiring in the surgeon and facilitate tissue preparation inside the body. This has allowed modern, high-resolution 3D laparoscopy to make the operating sequence and the subsequent healing process much less stressful for the patient and as free of complications as possible.

This innovative step into a less traumatic operating world has been possible thanks to the interplay of high-brilliance optics, full-HD camera and drive technologies integrated into the manual interventions.

Schölly Fiberoptic, with its headquarters in Denzlingen, Germany, has placed one focus of its development work over the last few years on the area of 3D technology and achieved impressive results. The new laparoscopy system ‘Einstein Vision’ (pictured), which has already proven itself in practical use, offers full-HD quality in 3D, providing an image true to reality of extremely fine structures inside the body.

This allows precise separation of tissues and exact positioning of surgical needles. The principle of the new system is based on the proven laparoscopy technology, but, in contrast to conventional solutions, this laparoscope is equipped with a 3D camera head and a robot arm that stabilizes the camera motion.

The principle of 3D photography

The basic functioning of three-dimensional photography can be readily explained using an analogy from nature: In humans and in many animals, the eyes are arranged such that they are able to see their surroundings simultaneously from two viewing angles. The eyes thus provide two images differing from one another. The brain combines them to a single image and calculates the spatial visual impression on the basis of the deviations. If a human being had only one eye, he / she could estimate distances and spacings only very poorly and would perceive his / her surroundings like in a plane.

To create spatial images, 3D cameras basically use the same procedure: two pictures are taken simultaneously from two different viewing angles. In doing so, the objectives must have a defined distance from one another, the so-called stereo base. In the human eye, for example, the distance is approx. 6.5 cm.

The ‘double image’ of the camera is combined to a three-dimensional picture as soon as the surgeon – similarly to what happens in the movies or on television – wears adequate glasses. The result of this procedure is a razor-sharp spatial image of the body interior, which allows the surgeon to operate with greater safety and less stress on the tissue, for example when removing tumors or lymph nodes, or reconstructing the pelvic floor, etc.

The distance of the objects to be photographed from the objectives is variable. To nevertheless guarantee a clear image, the camera has been equipped with a zoom function. To this end, the two objectives are displaced synchronously in linear direction. The driving force for the simultaneous displacement of the two objectives required for creating the 3D image is a direct current drive installed in the camera head of the new laparoscope. The objective holders, firmly coupled with the drive, guarantee synchronous picture-taking at different distances. All the surgeon has to do is actuating a switch on the camera head.

Finding a suitable drive was by no means a trivial endeavor. A series of application-specific requirements had to be fulfilled, such as the constricted installation space available in the camera head and the required low starting voltage of less than 1V. Despite this low voltage, the comparably heavy objectives must be displaced precisely and over a relatively long travel range of 12.7mm in any position. In addition to that, the high reliability and lifetime requirements of medical devices had to be fulfilled as well.

These application-specific requirements could be readily fulfilled thanks to a drive solution designed by PI miCos for this application. This company, which belongs to PI (Physik Instrumente) from Karlsruhe, Germany, is specialized in flexible positioning systems for a wide range of applications and has also been able to achieve a ‘tailored’ solution for the displacement of both objectives of the 3D laparoscope.

The driving force is a small direct current motor. The compact miniature drive of only 10mm in diameter and, including the gearhead, 42mm in length impresses with its high power density. Its low current consumption and low starting voltage of less than 1V are further properties that seem to make it the ideal choice for this application. Thus, this powerful minidrive supplies a power of 0.1W, which allows it to displace the heavy objects of almost 100g in weight bidirectionally without problems.

To be able to do this, the drive is arranged linearly, relative to the direction of motion. The rotary motion is affected by means of a high-precision toothed gear and transmitted to the fine-thread spindle, which then moves the slide containing the holder for the two objectives. The sliding bearing between slide and guide is low in friction and backlash due to a special coating. The coating and the high-torque start of the direct current motor contribute to the high-speed and high-precision displacement of the objectives despite the low voltage. This ensures a direct response to the control signals.

Moreover, the small motor with bell anchor withiron-free rotor coil and noble-metal commutation impresses with its low rotor moment of inertia and can be easily controlled thanks to its linear characteristic. This function is performed by the motion controller integrated into the control of the laparoscope. To limit the travel range, a small limit-switch board has been additionally integrated into the drive system.

Thus, it has been possible to install a customized and reliable drive solution for the objectives in the camera head of the laparoscope despite the constricted installation space. In the future, physicians and patients will benefit more and more often from the razor-sharp three-dimensional pictures from the body interior thus achieved.