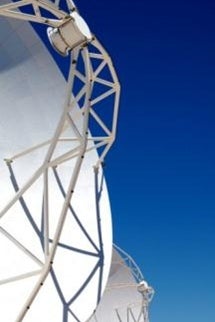 50 of the ALMA observatory antennas use high-precision Hexapods from PI. Under extreme ambient conditions of the Atacama Desert, the Hexapods align the sub-reflectors to the large main reflectors of the radio telescopes.

The ALMA (Atacama Large Millimeter Array) observatory currently is the most advanced telescope in the world; its antennas receive electromagnetic radiation at millimeter and sub-millimeter wavelength. ALMA provides imaging with up to now unachieved resolution and sensitivity. It gives insights into the birth of new galaxies, stars and planets, but also into star systems of the early universe that are more than 13bn light years away.

Technological demands here are high: low air pressure, temperature differences of up to 50°C, strong winds, dust and rain are additional challenges at 5,000m above sea level that have to be faced.

Hexapod for aligning the sub-reflectors

To keep the optical path at its optimum, the sub-reflectors even out external impacts on the mechanical system. Deviations can occur, for example, with antenna tracking that compensates for global rotation, with bending of telescope components due to gravitation, or through thermal effects or wind load.

The Hexapod systems with six degrees of freedom in motion are installed behind the sub-reflectors and allow for 6D positioning with resolution in the submicrometer and arcsecond range. The positioning system’s parallel kinematics structure is considerably more compact and stiffer than serially stacked multi-axis systems and leads to a very high resonant frequency. Since only a single platform is actuated, the moved mass is significantly smaller. This results in improved dynamics with considerably faster response.

For the Hexapods in the ALMA antennas, PI developed and manufactured highly stiff and robust joints, suited for operation also in extreme ambient conditions. The Hexapods can adjust the position of the sub-reflectors precisely to several millimeters.

The digital controller’s components for position control of the Hexapods have been adapted especially for reduced atmospheric pressure.

With this high-performance digital control technology, which combines incremental position sensors and optical reference sensors in the Hexapod’s individual struts, PI provides a high-resolution measurement and control system for the ALMA observatory.

Before start-up of the observatory, PI could prove the reliability and accuracy of its positioning systems in the ALMA VertexRSI test antenna, provided by Vertex Antennentechnik, a General Dynamics company. Also the technological predecessor of ALMA, the radio telescope of the Atacama Pathfinder Experiment (APEX) in Chile uses the high-performance six-axis positioning system.

The measurement data collected up to now and the insights deduced are of great scientific importance and prove the performance of the radio telescopes and their precision components.