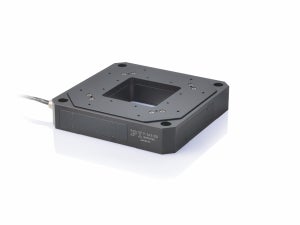 Surface inspections are nowadays indispensable in many areas. The trend is towards increasingly smaller structures, for example, when testing nanocoatings. Depending on the requirements, different methods are suitable; they range from interferometry and confocal microscopy to high-resolution camera systems, which allow three-dimensional inspections, and to nanoindentation which is used in material and hardness inspections. This area also includes Structural Health Monitoring, which is dedicated to state monitoring of structures. All these methods have at least one thing in common: If it weren’t for the piezo effect, they could not work with the required precision and reliability. Piezo elements offer many options as they can be used both as actuators and sensors.

The requirements that surface inspection systems demand of the positioning systems used are not only limited to their positioning accuracy. Other important parameters include the travel range to be achieved, high speeds for increasing throughput for large surfaces to be examined or constant travel speeds for exact measured values, and the lifetime. This is why in nanopositioning technology piezo ceramics are used, which are optimised in terms of these requirements.

This allows actuators based on piezo ceramics to make full use of their advantageous properties in practice: They are maintenance-free as they do not have any moving parts in the classical sense. The motion is based on crystalline solid state effects and so there are no rotating or friction-producing mechanical components. This allows motions to be carried out in the subnanometer range at high speed. Moreover, piezo actuators dissipate no power in static operation since electrically they act as capacitive loads. So it should come as no surprise that the compact piezo-based positioning systems from PI (Physik Instrumente) in Karlsruhe, Germany, are used in many surface metrology methods, some of which differ widely. In addition, analog or digital motion controllers tuned to the particular positioning system allow simple integration into the application at hand, while the sensors necessary for high-precision positioning are also included in the product range of the German firm.

Over the last four decades, PI (Physik Instrumente) with headquarters in Karlsruhe has developed into the leading manufacturer of nanopositioning technology. The privately managed company with more than 700 employees world-wide is thus able to fulfill almost any request in the field of innovative precision positioning technology. All key technologies are developed in-house. This means that every phase from the design right down to the shipment can be controlled: the precision mechanics and the electronics as well as the position sensors and the piezo ceramics or actuators. The latter are manufactured by the subsidiary PI Ceramic in Lederhose, one of the global leaders for piezo actuator and sensor products. miCos GmbH in Eschbach near Freiburg, Germany, now belongs to the PI company group as PI miCos. One focus in the broad product range is flexible positioning systems for ultrahigh vacuum applications as well as parallel-kinematics positioning systems with six degrees of freedom or special designs.

The inspection of technical surfaces increasingly requires noncontact and nondestructive methods that allow high-precision measurement of the surface topography. The white-light interferometry method allows measurements of evenness, vertical distances, parallelisms or other surface characteristics at high speed and high repeatability, either using a telecentric optics for large measurement volumes or a microscope optics for lateral high-resolution measurements.

All of this can however hardly be realised with conventional motor drives. The positioning system therefore is based on piezo actuators. They work free of wear and friction and without backlash and, due to their dynamics, are suitable for high scanning frequencies such as are required for 3-D surface measurements in real time. At the same time, play-free and high-precision flexure guides provide a high focus stability. In this way, travel ranges of up to several 100 µm can be achieved in the application described above. The accuracy of the motion of the kinematics is in the nanometer range.

Nanoindentation is an important tool in the broad field of materials testing. It is derived from the classical hardness test but is carried out on a much smaller scale. It can be used to determine the hardness of thin layers as well as material properties such as elasticity, stiffness, plasticity, and tensile strength, or fracture toughness of small objects and microsystems in fields such as biotechnology. These measurements involve applying a small force to a sample using a sharp probe and measuring the resultant penetration depth. The measured value is used to calculate the contact area and hence the particular property of the sample material. A particularly flexible system for nanoindentation is the NanoTest which is used as an informative testing system in various fields worldwide. It is not only used in research and development but also in production and the testing of finished products. The method of force application and the geometry of the indentation tip can be adjusted to suit the particular application. The system is suitable for use with a wide range of materials as it can apply forces of between 30nN and 500mN depending on the operating mode, and it can measure penetration depths of between 0.1nm and 50µm. This measurement is also performed by the already mentioned high-resolution capacitive sensors.

Nanopositioning System for a Precise Scan

A simple physical principle is at the heart of capacitive metrology: When a voltage is applied, a homogenous electric field is produced between the plates of a capacitor (figure 9). If the gap between the plates changes, the output signal from the metrology electronics changes proportionally. The output signal is only proportional to the change in distance between the plates if the electric field between the electrodes really is homogenous. In order to achieve this and to exclude any edge effects that could possibly distort the measurement result, the actual measuring surface of the capacitive PISeca sensors is surrounded by an active guard ring with the same electric potential as the surface of the sensor. This design provides optimum screening from interfering external electric fields and an accurately defined boundary of the measuring area. It generates an extremely homogenous electric field which leads to measured values with very high linearity. Typical linearity values are below 0.01% of the nominal measurement range.

A piezo-based nanopositioning system (pictured) provides the motions in the x and y axes which are required for the scan. Its 200 x 200µm scanning range allows accurate statements to be made about the properties of the contact area and its surroundings. The positioning accuracy of less than 3nm gives the scan high positional resolution. This means, critical loads are accurately assigned to a defined position which in turn allows conclusions to be drawn about the local material properties, and the high number of closely packed measuring points make it possible to investigate very small samples.

The trajectory fidelity during the scan is improved even more by active guidance: Capacitive sensors measure, in this case as well, any deviations in the axis perpendicular to the direction of motion. Unintended crosstalk of the motion (e.g., as a result of an external force) into a different axis can thus be detected and actively compensated in real time. This can keep the deviation from the trajectory down to a few nanometers, even in dynamic operation. A digital controller provides the necessary control. It is specially matched to the multi-axis, parallel-kinematics, piezo nanopositioning systems and guarantees high linearity in dynamic operation.

A special field of surface metrology, which is dedicated to state monitoring of structures, is Structural Health Monitoring. It allows you to continuously obtain information of the functioning of components and buildings and detect damage such as fissures or deformations at an early stage, in order to initiate counter measures. Here, too, piezo elements are involved: The DuraAct transducer can be used both as sensor and as actuator. It is capable of generating vibrations and measure their propagation in material structures. A changed vibrational pattern shows failures in the structure even before fissures arise, e.g., in machine parts, bridges, wings of airplanes, etc.

At the heart of the transducer is a piezoceramic film with an electrically conductive layer applied to each side. This construction is then embedded in a flexible polymer strip. The advantages of this design are multiple: The piezoceramic is electrically insulated, mechanically preloaded, and, out of the basically brittle ceramic, a unit is created which is so robust that it can be affixed to surfaces with bending radii as low as 20 mm. The transducers can simply be glued to a surface, or they can be integrated directly into a structure or structural material. To fit the specific application, custom transducer geometries are also possible as are customisation of the curvature, dimensions and thickness of the ceramic. The same is true for the electrical connections. Once again, piezoelectric elements prove their versatility which will continue to open up further areas of application for them in surface metrology.