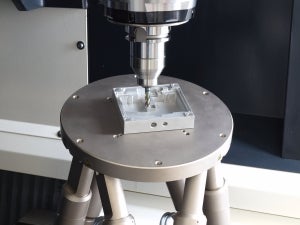 In many areas of automation technology, precision requirements are becoming more and more demanding. There is no end in sight to this development. Therefore, it is no wonder that, whenever multiaxis positioning systems are needed, the popularity of parallel-kinematic systems is growing. One example for this is a so-called Hexapod. The travel ranges of Hexapods go normally from a few to several hundred millimeters. Even major loads can be positioned accurately to the micrometer using Hexapods. Standardised fieldbus interfaces guarantee an easy connection to parent PLC or CNC controls so that Hexapods can work synchronously with other components in one automation line.

Over the last four decades, Physik Instrumente (PI) from Karlsruhe, Germany, has become known for high-capacity and high-precision positioning systems with up to six motion axes. PI’s product range also includes powerful six-axis parallel-kinematic systems in numerous versions. They are suitable for different loads, come with different types of drives and are designed for all kinds of ambient conditions. Numerous applications, ranging from handling systems in electronics fabrication and tool control in precision machining, through medical technology, to optical systems, like those found in space telescopes, can be covered.

Hexapods will now conquer more areas of application in the broad range of industrial automation technology because they communicate directly with parent controls. This allows users to benefit from the advantages of these positioning systems in even more applications. Hexapods can be well protected against adverse ambient conditions, for example, by bellows. In this case, they even resist the rough ambient conditions in automatic machining units, in which coolants are used for metal cutting processes.

Flight simulators are probably the best-known application of Hexapods; six actuators act on the same platform, which can move and tilt in all directions. Industrial Hexapods manufactured by PI, however, are much more accurate. Depending on the requirements of the application, they are driven by high-precision drive screws and exactly controllable DC or stepper motors, or directly by linear motors, e. g. based on piezo actuators, instead of using hydraulic drives. In all cases, the users benefit from the advantages of parallel kinematics:

In serial kinematics, each drive is assigned to a specific motion axis and acts on a separate platform. This may simplify the mechanical construction and axis control. However, because guiding errors accumulate in stacked systems, the achievable accuracy is less than in parallel-kinematic systems. In contrast to serial kinematics, all actuators act directly on the same platform. The resulting advantages go beyond increased accuracy and include low moved mass and consequently better dynamic performance that is the same for all motion axes, no cable management because cables are not moved and a significantly more compact design.

Positioning is in six degrees of freedom: three linear and three rotary motion axes. Depending on the geometry of the Hexapod, rotations of from a few degrees up to 60° and with linear motion, translations of from a few millimeters to several centimeters are possible. The repeatability and minimum incremental motion can be better than one micrometer. Due to the low mass of the moving platform, Hexapods have considerably shorter settling times than conventional, stacked multi-axis systems.

Due to a direct connection to the parent control, Hexapod systems can be integrated basically in every automated production line. A synchronised clock with other automated components can easily be achieved, for example, for automated supply systems, etc. Consequently, there are numerous areas of application for Hexapod systems in automation technology, from metal cutting to complex bending processes.

In such applications, the PLC can communicate with the Hexapod system over a standardised fieldbus interface. It acts as master and defines the nominal position in Cartesian coordinates and the trajectories; in return, it gets the actual positions also over the fieldbus interface. All other calculations required for the drive commands for the parallel-kinematic six-axis system are done by the Hexapod controller, i.e. transforming the nominal positions from Cartesian coordinates into the drive commands for the individual drives. In this case, the controller acts just like an intelligent drive. The cycle times for determining new positions, evaluating signals and synchronising are between 1ms and 3ms. Fieldbus interfaces are currently available as plug-in modules for Profibus, EtherCAT, Profinet, CANopen and SERCOS. This makes Hexapod systems compatible with a large number of fieldbus systems. More fieldbus interfaces will be available if required.

Of course, the Hexapod controller can also act as parent control for position control. In this case, however, the PLC only issues a position command. During the run, the motion cannot be synchronised with other drive axes, measuring systems, etc.

If there is no parent PLC or if synchronising with other system components is not required, the Hexapod controller can now also control the trajectory based on G-code according to DIN 66025/ISO 6983. The Hexapod system allows then to move the workpiece or tool smoothly and with high precision during machining so that the mechanical system does not start to vibrate.

To adapt the trajectory perfectly to the requirements of the application, it is possible to define various coordinate systems by means of the controller, for example for workpiece and tool, which refer to the position of the workpiece or tool.

Hexapods can come with many different structures. A modular concept allows customising them within a short time. The Hexapod struts are designed so that their length can be easily scaled. They include the required electronics for reference point switch, limit switch, position sensor and – depending on the motor – electronic commutation. Their standardised joints allow to combine them with almost any base plate and top, whatever type of geometry. To find a suitable solution for a certain task will be much easier, in particular because Hexapods can even position and move major loads up to several tons just like that with the high precision that is typical for them. Automation control will benefit from these advantages in many areas. Look forward to it.