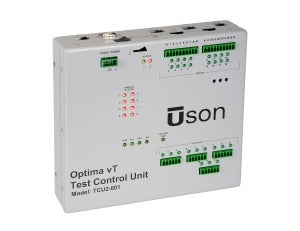 USON global sales director and leak testing applications engineering team worldwide supervisor Gene Grilli said; "Optima’s many built-in mathematical functions are one of several features that make it one of the most versatile leak detectors today. For example, a product with four chambers can be tested concurrently and, using the Optima’s math feature, summed to create a total, thereby providing both an individual and overall result, effectively cutting cycle time.

"Additionally slope and intercept calculations along with averaging can easily be performed, not to forget the host of other built in formulas. This is not impossible to do manually or with spreadsheets in a slower way, but it’s an example of how Optima’s built-in math streamlines production processes without putting an additional burden on the system controls."

Prior to the videoconference consultation a USON leak testing specialist will review current leak test methods in place so that a succinct demonstration of the relevant math functions of Optima, which will have greatest impact, are highlighted in the demonstration.

Optima vT leak and flow tester has many features that are designed to make it the leak tester of choice when considering leak tester investments for the applications of both today and tomorrow. In addition to the built-in math functions, these include:

Appointments can be scheduled by writing to OptimaMath@uson.com or calling Mr Gene Grilli +281 671 2000.