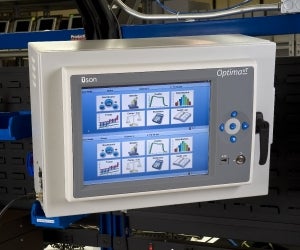 Medical device design and manufacturing engineers, quality engineers, automation specialists, machine builders and others seeking leak detection equipment that can be custom configured to their unique test application requirements without added costs, can now obtain a competitively priced and first-of-a-kind leak and flow tester from Uson – the Optima vT leak and flow tester.

Uson’s Optima vT includes one or two test channels with up to four sensor inputs each, totally customizable pneumatics, multiple built-in automated calculators, myriad data handling and storage options and other features that combine to make the Optima best-match test technology for the greatest number of leak and flow test applications.

R&D for the multi-function single or dual channel configured Optima vT leak and flow tester began in 2009 and incorporates Uson’s vast and unparalleled knowledge base of the wide-ranging requirements for leak detection and flow testing in medical, automotive, and other industrial parts testing using the unique and adaptable two-channel eight-sensor technology in its core to deliver best-in-class test technology without a premium price tag.

Joe Pustka, Uson technical specialist comments, "No matter what you want to achieve in your test application Uson can do it and now the Optima vT will most often be the leak detector of choice. You want production speed on the order of a million parts a year including highly accurate and multiple tests? We can configure the Optima to be that throughput king. You want a variety of tests done in sequence such as a pressure decay test followed by a series of flow tests in different ranges? That is doable too."

"Add in custom pneumatic configurations allowing you to select best-match regulators, valves and additional sensors plus a wide range of built-in automated calculators such as those used for temperature compensation or total leakage calculators that can eliminate needs for added test sequences, and other built-in math and you have Optima vT, which hands down is the most versatile leak detector design to ever be released."

"Optima vT configures to the highly varied specifications for testing that Uson has helped engineer test solutions for ever since we first developed dry air leak testers for NASA almost 50 years ago and then introduced to commercial applications. With Optima vT you not only get a leak and flow tester that is best-match for your application today but also will be configurable to your changing test requirements of tomorrow."

Key features of the Optima vT leak and flow tester include: