Covid may have taken business’ eyes off global warming, but that doesn’t mean anything has changed: Something must still be done. To ward off the catastrophic effects of climate change, scientists say the global economy must reach net-zero greenhouse gas (GHG) emissions by 2050.

What is driving M&A activity in the MedTech space?

The COVID-19 pandemic has left an indelible mark on the MedTech landscape. Changes in how healthcare is delivered, and new treatment modalities, are creating opportunities and challenges for both new and traditional players. As companies sought out opportunities during the pandemic-driven downturn, the number and value of mergers and acquisition deals in the MedTech space increased. Companies worked to reposition themselves in the newly aligned healthcare world, but with further economic turmoil expected: will these trends be repeated? And what tech areas should firms be looking to expand their capabilities into? GlobalData’s report, “Themes driving M&A activity in the Medical Devices Sector, Q1 2022,” draws upon GlobalData’s extensive MedTech deals databases, highlighting major trends and hot themes in M&A activity. This report will assist you in: Download the full report to understand what to expect and how to align your business for success.
By GlobalData 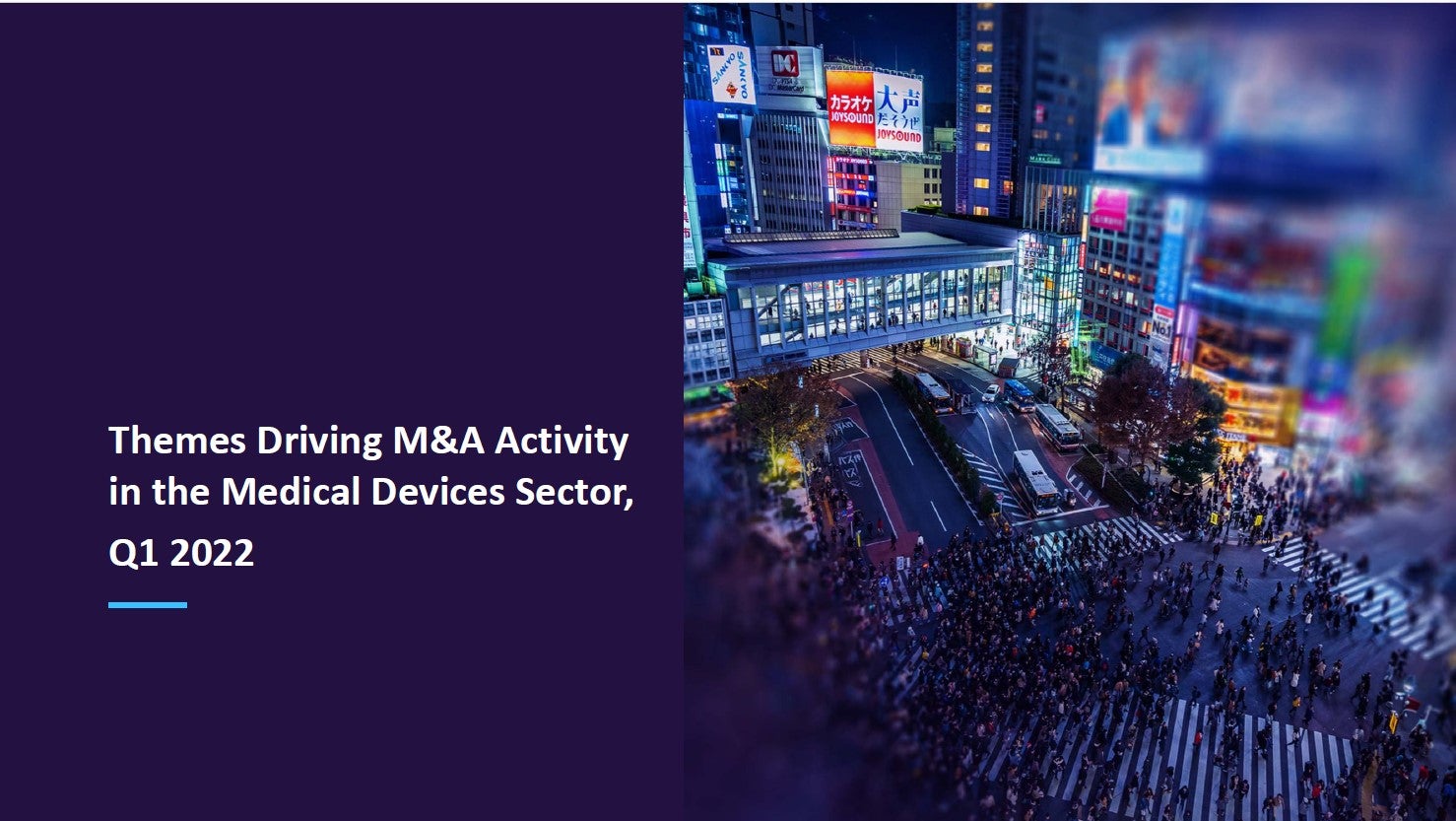 What can business do in the face of looming climate crisis? In the view of a new GlobalData report on climate change, every company can  – even should – become a climate leader, especially as governmental action has not yet established a path to net-zero. Likely winners in its eyes from this move include automotive, retail, media, banking, insurance and technology.

While this leadership is easier said than done, businesses can perhaps look towards the examples from industry leaders such as those in the tech field for said climate leadership  – and the surprising, more beneficial influence of asset managers.

Hundreds of companies have already made commitments to reach net-zero by 2050. More than a hundred have gone one further by committing to a 2040 target. GlobalData notes that non-governmental organisations and the private sector are stepping in where Big Government fails, launching decarbonisation initiatives that are “driving down GHG emissions in virtually every industry and region of the globe.”

What’s driving these ambitions goes beyond idealism and philanthropy, but the financial risk inherent in climate change. A report by the Universal Ecological Fund estimates that failure to reduce emissions will cause $2bn per day in economic losses by 2030 from weather events exacerbated by human-induced climate change.

“The financial sector is adding more pressure for net-zero,” note GlobalData analysts in their thematic research. “Large asset managers are beginning to vote against the management of companies they believe are not adequately addressing climate risk in their business strategies.”

This is resulting in what GlobalData calls a climate action feedback loop that “rewards and reinforces” corporate climate action, prompting more of it. By going after the affections of customers and investors, this loop is arguably helping businesses to accomplish what governments have not yet achieved. The grandest benchmark in governmental intervention, the Paris Agreement, is an example of where business can blaze a trail where world leaders have failed.

The Paris Agreement aims to limit warming to preferably 1.5°C with a climate neutral world by mid-century. To make this target a global reality needs higher investment in low carbon technologies, carbon capture and storage technologies and carbon offset projects. There also needs to be serious investment in renewable energy sources.

Helping this drive are initiatives like the Science-Based Targets initiative (SBTi), a collaborative effort launched in 2015 by four non-governmental organisations including the World Wide Fund for Nature (WWF).

SBTi recruits companies to set targets for noteworthy reductions in GHG emissions, as aligned with the science behind the Paris Agreement goals. In GlobalData’s view, the SBTi works as by providing external, accredited validation for green-leaning companies, it facilitates scrutiny, promotes accountability and gets results: reporting on a subset of 338 companies, SBTi’s analysis found the businesses had reduced their annual emissions by 25% between 2015 and 2019.

The is also the big business equivalent of the Paris Agreement, 2019’s Climate Pledge as founded by Amazon with NGO partner Global Optimism.

As SBTi member and first signatory of the pledge, the e-commerce giant has been keen to show its green credentials, claiming publicly to be the largest corporate purchaser of renewable energy.

With the Climate Pledge, Amazon made three core commitments: to measure and report its GHG emissions regularly; to implement decarbonisation strategies in line with the Paris Agreement; and to achieve net zero annual carbon emissions by 2040.

As of February, over 100 signatories have joined The Climate Pledge, making the same commitments, including Mercedes-Benz, Uber, IBM, Visa and Microsoft, which by the way also claims, like Amazon, to be the largest corporate purchaser of renewable energy.

Google is yet to join, but the tech monster has claimed to have already erased the historic carbon footprint of its 20-year existence, whilst also pledging to use only carbon-free energy by 2030. It too is also investing in green bonds and environment-friendly projects to the tune of billions of dollars.

But the Big Three of Google, Microsoft and Amazon may have blood, or rather oil, on their hands. 2019 saw more than 4,000 Amazon workers sign a public letter to CEO Jeff Bezos over the company’s ties to the oil industry. Alongside sponsoring industry conferences and counting the likes of BP and Shell amongst its clients, Amazon is drawing more oil and gas entities (O&G) towards its cloud service Amazon Web Services.

One of Amazon’s main competitors in courting the fossil fuel giants is Google  –  or at least it used to be until the company pledged to no longer create custom artificial intelligence (AI) tools for O&G companies. The decision came off the back of a 2020 Greenpeace report which called out the Big Three for “helping big oil profit from destruction.” But the company is likely to keep profiting from the regular AI tools it still provides for O&G clients.

While Big Tech’s investment is a huge one, it’s clear there may be a lack of offset when it comes to their business dealings. Practices have also been called into question, with Amazon being accused of destroying staggering amounts of unsold goods in Germany, France and the UK.

Countries are also knee-deep in murky waters when it comes to putting the world before profit.

Climate Action Tracker (CAT), an independent scientific analysis resource that tracks and monitors countries’ progress, makes clear that their commitments so far are not sufficient to reach the Paris target.

As shown below, CAT’s data shows the world is not on track for this goal. Many developed nations have insufficient plans of varying degree, with China, Indonesia and South Africa deemed critically insufficient.

The temporary environmental peacetime of the pandemic may have seen global CO2 emissions fall nearly 9% in the first half of 2020 compared to the same period a year before. But Covid has changed arguably very little, and while President Biden may have reversed Trump’s rejection of the Paris Agreement, a different story is being told back home.

Biden’s $115bn plan for roads and bridges in his infrastructure proposal would depend on the heaviest component of crude oil: asphalt. As GlobalData notes, research has found that asphalt in California’s South Coast Air Basin emitted “more secondary organic aerosols in the summer than gas and diesel vehicles combined.”

And among G20 countries as whole, nearly $293bn has been allocated to fossil-fuel energy, with green energy getting only $157bn. In the UK, the imbalance is worse, with an allocation of some $3.8bn to fossil fuel and nuclear energy production in contrast to $165m to renewables.

Considering the Paris Agreement has no legal binding in its terms, it shouldn’t be a surprise to see so many countries effectively pulling a Trump volte-face of their own.

While developing nations which tend to have less carbon-intensive infrastructure are more likely to meet the Paris target, their increasing industrialisation means this progress won’t last for long.

The irony is that developing nations will more likely face the brunt of climate change’s devastating consequences: stats have found that climate change has already boosted heat-related deaths in warm seasons by an average of 37%. The proportion was much higher in Central and South American countries such as Colombia and Guatemala, and more than 50% in the Philippines in South-East Asia and Kuwait and Iran in the Middle East.

Damage from the burning of fossil fuels and methane and other gases is already in place with lasting impact: CO2 persists in the atmosphere for 300 to 1,000 years. While methane persists for much less at about 12 years, it has more than 80 times the warming power of CO2 and, according to NASA, with a greenhouse effect is 28 times more powerful over a 100-year timescale.

Current methane concentrations are estimated by client scientists to be about 2.5 times greater than in the 1850s and that methane is responsible for about one-quarter of the global warming that has occurred since then. It’ll be within two centuries of that date that we’ll likely see the consequences. The World Bank for example estimates that by 2050, 140 million people will be affected by extreme droughts, floods and storms.

By the same date, sea-level rise could affect islands such as The Bahamas and see low-lying cities such as Jakarta and Mumbai catastrophically submerged. Developed countries are also in danger: Most of the US East Coast will likely be affected by this looming rise.

This is why GlobalData believes environmental issues such as biodiversity and dwindling natural resources pale in relation to climate change, and why there should be no more increase in GHGs.

Moving away from governments, we may find the most promising – and perhaps surprising – influence on businesses going green actually comes from investment wonks.

Asset managers such as TCI, BlackRock and JP Morgan are kicking business into gear by speaking in the one language they know about: money.

JPMorgan for example reduces its holdings in companies that do not align their operations with the Paris treaty. Last year in 69 cases, BlackRock took voting action against companies on its portfolio not developing long-term climate strategies.

And while the Paris Agreement may be deemed both benchmark and flashpoint by investment managers, it’s more likely the less-glamourous city of Glasgow will turn the world greener.

The Glasgow Financial Alliance for Net Zero, launched in April this year, spans more than 160 companies, including 43 banks from 23 countries, all pledging to cut their GHG emissions and ensure that their investment portfolios are aligned with the Paris net-zero vision of 2050.

The initiative aims to discourage high-carbon investments and favour low-carbon infrastructure and technologies ahead of COP26, the UN climate talks set for Glasgow in November 2021. Such a move is proof by GlobalData that asset managers are “doing something that regulators cannot.”

“In demanding robust climate strategies, asset managers are not telling their portfolio companies to place climate performance ahead of financial performance. They’re telling companies to figure out how to do both.

What is driving M&A activity in the MedTech space?

The COVID-19 pandemic has left an indelible mark on the MedTech landscape. Changes in how healthcare is delivered, and new treatment modalities, are creating opportunities and challenges for both new and traditional players. As companies sought out opportunities during the pandemic-driven downturn, the number and value of mergers and acquisition deals in the MedTech space increased. Companies worked to reposition themselves in the newly aligned healthcare world, but with further economic turmoil expected: will these trends be repeated? And what tech areas should firms be looking to expand their capabilities into? GlobalData’s report, “Themes driving M&A activity in the Medical Devices Sector, Q1 2022,” draws upon GlobalData’s extensive MedTech deals databases, highlighting major trends and hot themes in M&A activity. This report will assist you in: Download the full report to understand what to expect and how to align your business for success.
By GlobalData

View All
View All
Features