Virtual therapy is virtually everywhere these days. Smart watches can vibrate to hinder PTSD-related episodes during sleep. Companies offer their employees online counselling via Zoom. Meditation apps such as Headspace and Calm can be found on smartphones and even TVs as multi-part streaming series.

The success of UK-US brand Headspace is a good example of the reach digital therapy has in consumers’ lives, with its warm and quirky visuals available for guided meditations on Netflix since the start of this year. But there’s more to digital therapy than colourful apps that help us relax.

The health tech sector includes augmented reality (AR), intelligent assistants and symptom-tracking tools designed to treat mental and behavioural health disorders along with neurological conditions. Success in these areas relies less on 5-star reviews and charming UX, but more on good tech design. There’s also the approval of medical experts and regulatory authorities, often a stumbling block in digital health for neurology. The tide though appears to be changing when it comes to at-a-distance tech in therapy.

“As the public becomes more digitally savvy, the acceptance of digital health technologies is likely to increase,” it continues, whilst also noting that adoption of virtual therapy is already on the rise. Like with most sectors and themes, 2020 proved to be a disrupting force in healthcare, bringing with it higher technology adoption.

Away from tech-driven solutions to help the healthcare system deal with the overload on services and supplies that a pandemic brings, digital health applications also kept patients tethered to staff and therapeutics when Covid kept doors closed and priorities elsewhere.

“Covid-19 has led to an acceleration of digital health innovation,” report GlobalData analysts. “HCPs have been quick to implement alternative solutions to in-person care to ensure patients can access diagnostic and therapeutic services. This has led to significant increases in the use of remote patient monitoring, telemedicine platforms, and virtual clinical trials.”

GlobalData also acknowledges that digital therapy has increased because the pandemic “has placed enormous strain on the mental health of the public” through fears and struggles over employment, infections and isolation and the general uncertainty about what a post-Covid world might look like.

The circle is a vicious one, in that accessing mental health services is a challenge when lockdowns are enforced, but mental health conditions commonly spike during stressful periods such as a pandemic. According to data from the Kaiser Family Foundation, approximately 4 in 10 adults in the US have reported anxiety or depression symptoms during Covid-19, an increase from one in ten in 2019.

Data from the World Health Organization (WHO) in October 2020 meanwhile revealed that out of 130 countries surveyed, 60% reported disruptions to mental health services for vulnerable people, 67% to counselling and psychotherapy, and 65% to critical harm reduction services.

It’s probably no coincidence that there’s been a rise in mobile health (mHealth) apps, especially in relation to mental health. Headspace for example reported that in June 2020, inbound requests from companies looking to support employees had increased by over 500% since the pandemic began last March.

An increase in downloads for rival brand Calm was seen in Q1 2020, in line with the same month when Covid sprung. The Calm app had a quarterly average of almost five million downloads since Q2 2019, and this increased to almost six million in Q1 2020 and 6.6 million in Q2 2020. A celebrity-narrated TV show of its own on streaming service HBO Max last year probably helped this push, along with app-exclusive music by hipster luminaries including Diplo, Toro Y Moi and Julianna Barwick.

It would be wrong to say digital health in neurology was a non-starter prior to the virus. It would be equally incorrect that it took a pandemic to change the minds of medical professionals on the benefits of virtual therapy.

The American Medical Association (AMA) surveyed physicians in both 2016 and 2019 on the adaption of digital tools. Data showed that by 2019, physicians appeared to be overcoming resistance to using digital tools in clinical practice, with almost 90% claiming to see some advantage in their use, with an increasing number – 40% – of primary care physicians seeing a definite advantage.

A more recent survey of the healthcare industry shows that lack of physician buy-in isn’t considered a major barrier to the use of digital technologies. Instead, a poll by GlobalData found that cost was the main hurdle to use, as indicated by 19% of 158 respondents. This was followed by a lack of integration into existing workflow and systems, security concerns, and regulatory or reimbursement issues (all 15%). Lack of physician and patient buy-in totalled 9% and 8% respectively. 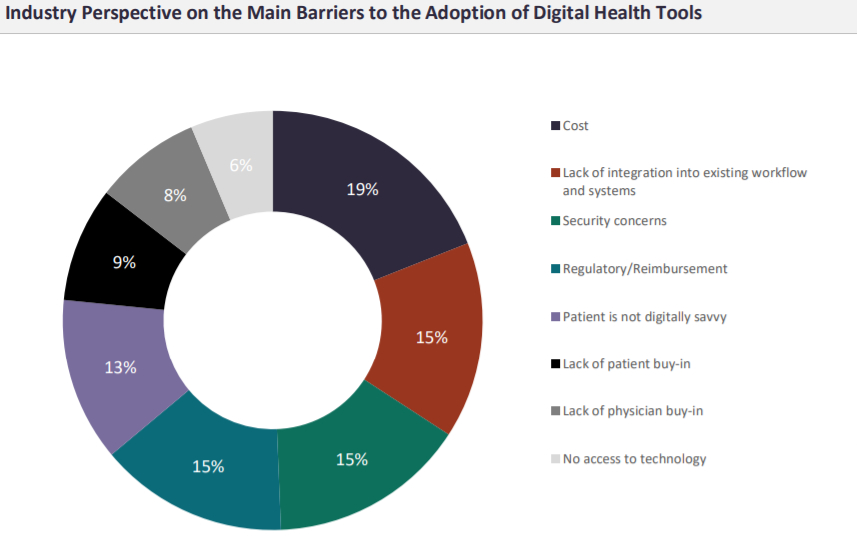 (Above) Q: What are the main barriers to the adoption of digital health tools?
Source: GlobalData; 158 respondents who visited the Pharmaceutical Technology site during February 2- March 10, 2021 ©GlobalData

Payer adoption of virtual therapy solutions may be a major obstacle to the tech. Generally, the reimbursement landscape for digital health interventions is complex, meaning that disruptors have struggled to secure payments for their solutions, ultimately leading to commercialisation failures.

But, as GlobalData notes, the implementation of reimbursement policies has been underway in some regions for some time. This is particularly true in Europe, where publicly funded healthcare systems are ubiquitous and so digital health companies target payers directly as the main source of payment.

Germany was the first country to provide a dedicated route to national reimbursement for digital health applications (DiGA). In September 2020, the first prescription DiGA was approved for reimbursement in the country. Since then, a total of 11 DiGAs have been reimbursed for use in a wide range of conditions including insomnia, anxiety, pain, migraine and multiple sclerosis.

An analysis of mobile app data sourced by GlobalData and Airnow Data shows the majority of neurology-based mHealth apps had an increase in downloads since they were approved for reimbursement. 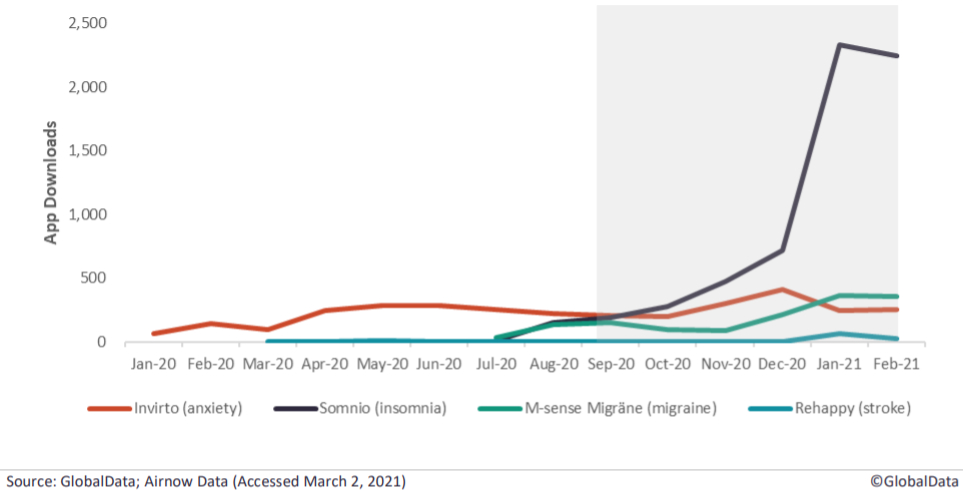 Outside of cost and regulation though, the bigger problem for health tech might be with the tech makers themselves. GlobalData analysts point to what they call “an overall lack of focus on health outcomes,” especially with mHealth apps, and a “need for better design applications with a focus on specific neurologic conditions, as opposed to general health and wellness.”

By appealing to a general consumer base and riding on the meditation trend, apps like Calm and Headspace have legitimised digital health more in the eyes of the public. But for more focus and genuine innovation, it’s the niche interventions we need to turn to.

Designed for sufferers of neurological ailment Parkinson’s disease (PD), the Roche PD Mobile Application V1 app is one interesting example. The smartphone application sets out tests for patients to track the progress of their condition, monitoring them via various biomarkers. These tests assess the patient’s voice, rate of tremor, balance, gait and dexterity, all through interaction with a smartphone. A similar symptom-tracking app by Roche, called Floodlight, has also been developed for those with multiple sclerosis (MS).

Wearables is another driver of digital health disruption, and one where Big Tech’s shadow can be found – although not to the extent one might assume. Cognoa has based its Superpower Glass wearable on Google smart specs Google Glass, a device that helps autistic children better understand facial expressions through the use of emojis overlaid on the lens. To Cognoa’s credit, there is a specific neurological focus to the augmented glasses, but some autism experts have been left unimpressed.

While Apple may have cornered the market in regards to physical health monitoring via its Apple Watch, there is little of its footprint in neurological health. Instead, the most interesting developments in wearables can be found in proprietary hardware by smaller tech names.

One example is XRHealth, a brand whose products are covered by insurance for over 50 million people in the US, and which debuted its eponymous ADHD-treating virtual reality (VR) app last summer. Following FDA permission, the therapeutic was trialled in patients’ homes with a delivered kit that included a VR headset. The service also offers a personalised care plan, plus in-app messaging and video calls with a dedicated clinician. While VR may be an alien concept in the common household, teleconferencing with a medical professional is perhaps more agreeable to consumers after the pandemic’s video chat boom.

“In neurology, the wearable field tends to be dominated by smaller specialist providers, mainly in areas like epilepsy, tremor detection, gait analysis, and neuromodulation,” agrees Kathryn Whitney, MSC, director of thematic analysis at GlobalData. “For example, both Empatica’s Embrace and Smart Monitor’s SmartWatch Inspyre devices can be used by epilepsy patients for the early detection of seizures.”

“Improved investment means developers in the space are more confident that solutions will be successful, and there has been a boom in innovation with a plethora of startups launching and scaling solutions,” adds GlobalData managing analyst Roxanne Balfe. “Pharma companies looking to capitalise on this explosion in innovation have increasingly partnered with smaller healthtech startups to co-develop solutions, building on the startups’ proprietary expertise and combining with pharma’s clinical and disease knowledge.

“As these technologies are often so specific, targeting, say, pain associated with migraine, or tremor associated with PD, the developers have become experts in their solutions for these specific diseases. Large tech companies coming from a broader perspective simply don’t have the same disease-based or clinical knowledge.”

“This is not to say that consumers cannot use their Apple Watches or Fitbits in neurology – the Apple Store has numerous apps for the watch that can be used to detect epilepsy seizures, including SeizAlarm and the app for the SmartWatch Inspyre,” continues Whitney. “Whether we see the big tech companies developing in-built sensors for seizure or tremor monitoring remains to be seen.”

View All
View All
Features