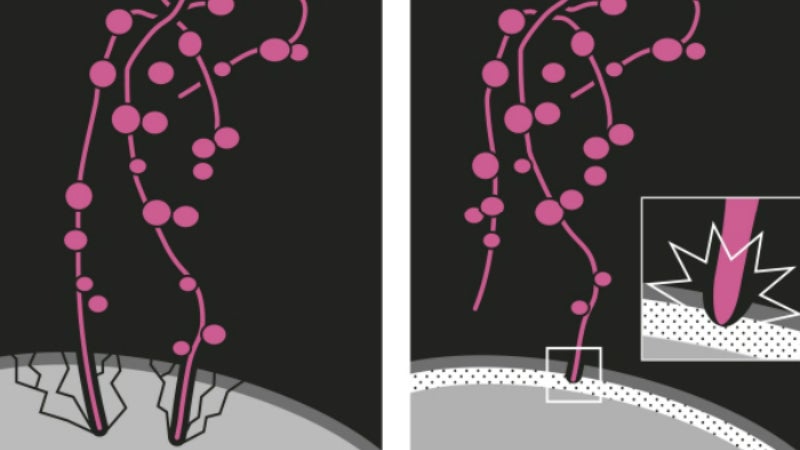 Fungal attacks on elastic polymer materials in the body, such as silicone and polyurethane, are a serious problem. This relates to fungi entering the pores of applications, which tend to be made from silicone or polyurethane, and chemically and mechanically deteriorate the polymer and thereby destroy the application, which endangers patients – especially those with weak immune systems.

Researchers have been trying to solve this problem for a long time. When Dr Mårten Rooth and Dr Anders Johansson at Nanexa started looking at possible solutions, they were not concerned about curing the body from fungal infection. Instead, they were focused on protecting polymeric materials. The result was a patented surface coat.

"There’s nothing new about fighting fungal attacks on polymeric materials. One just has to cover the material with a toxic coat to kill the fungus. The problem is that the rest of the body is exposed to the toxic substance", said Johansson.

Polymeric materials that remain in the body for more than one or two weeks are often attacked by fungus. Researchers at Nanexa came up with the idea of covering an antifungal layer, like silver, with a coat of silicone. In other words, the material is covered with two layers. When fungi attack the material, they penetrate the silicone and then encounter the silver. A little hole is made in the silicone but there is no leakage of silver ions. The hole is so small that the likelihood of repeated fungal attack in the exact same place is extremely unlikely.

"The material is covered with two layers. When fungi attack the material, they penetrate the silicone and then encounter the silver."

"There are a significant number of advantages with our double coating," added Johansson.

Naturally, it is less expensive if you do not have to replace medical probes and catheters. The life of patients becomes significantly easier since they no longer have to repeat unpleasant operations. A catheter or probe sometimes needs to remain in the body for several months, and with Nanexa’s double coating the device is essentially unaffected by fungi.

Another advantage is that silver doesn’t leak and run out, since it is fully encapsulated. Furthermore, the double coating is applied with a well-known and proven technology that basically means that it can be applied anywhere in the world.

There are many ways to use double coating. Catheters and medical probes are just two important examples. Dental plates, for example, are also subject to fungal attacks.

"Patients with depressed immune defence systems are often given antibiotics. When the bacterium disappears, fungi gets free reign. The mouth is a very good breeding ground for fungi," said Johansson.

The response from clinical experts has been overwhelming and the material has been proven non-toxic.

Nanexa was founded in 2007 at the Ångström Laboratory of Uppsala University in Sweden. Its foremost aim was to commercialise nanotechnology know-how.

"A catheter or probe sometimes needs to remain in the body for several months, and with Nanexa’s double coating the device is essentially unaffected by fungi."

In addition to its patented double coating, the company has produced filters with unique qualities and advanced coatings of all kinds of materials and properties. One example of this is a joint project in conjunction with the Swedish Defence Research Agency. This project saw a nano-layer of alumina being applied to sensors used to detect underground nuclear explosions. Other examples include low-friction surfaces used for the medical device industry. Nanexa also consults in all areas of nanotechnology.

"Since we specialise in materials rather than medical devices, we can tackle different types of medical problems from new angles. This means that we can often come up with solutions to medical problems that medical experts have not thought of," added Johansson.

How advancing tech has shaped mental health in 2022