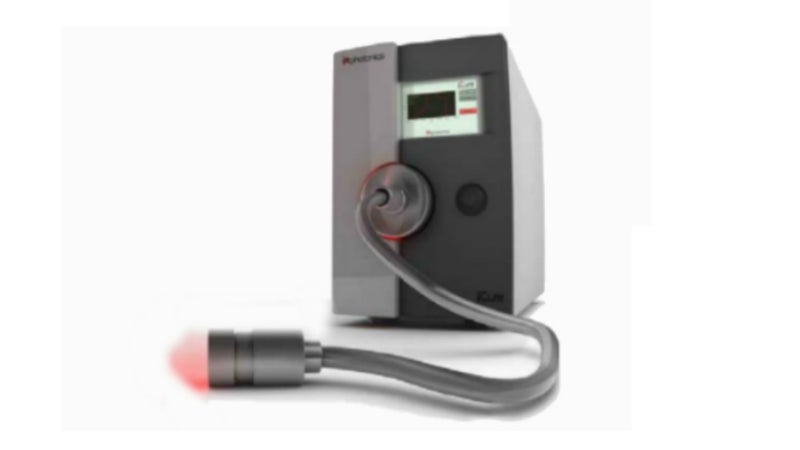 When it comes to adhesive bonding, process engineers responsible for designing and maintaining high-value production lines share a common goal: an in-line curing process that creates high-quality bonds, speeds production and integrates easily into existing manufacturing lines. Two recent – but increasingly important – additions to the wish list include being energy efficient and eco-friendly.

Adhesive curing is a critical process step in many industries including semiconductors, health care devices, mobile phones and consumer electronics. The market for systems that cure engineering-grade adhesives has been estimated to be greater than $500 million for applications that place a high value on speed and quality. The solutions that dominate this sector have not changed much in years. But there is little doubt that they can be improved.

There are currently two widely deployed technologies available to cure adhesives quickly in a manufacturing environment: UV/visible and thermal radiation. Both have advantages and suffer limitations that, up to now, could not be overcome.

UV/visible spot curing: UV radiation curing offers a rapid and on-the-spot cure. It has the advantage of focusing energy directly on the adhesive, thus using less energy than thermal ovens and less time. The UV/visible radiation curing requires adhesives that are variations on polyacrylate formulations and consequently have very good adhesion and fast reaction to light energy in the targeted absorption bandwidth of their photoinitiators. However, they can suffer from tacky surfaces and inconsistent physical properties when they are improperly irradiated.

Thermal curing: ovens or infrared lamps are used to heat the entire product or subsystem instead of applying heat directly to the adhesive. They use a great deal more energy than needed and are characterised by cure times in the tens of minutes. Because it is often an off-line process, thermal curing also interrupts the process flow and slows the production line. Thermal cure adhesives generally tend to be formulated with epoxy chemistry and consequently can achieve tack-free surfaces and much greater glass transition temperature (Tg) than polyacrylate adhesives cured UV adhesives.

Designing a curing system that can be successfully deployed in a wide range of industries is no easy task. Curing procedures and goals vary as widely as the products being manufactured. Medical devices, for example, usually require the most durable, highest quality bond possible. Some electronic assembly applications, on the other hand, call for the bond to hold ICs and other electronic components in place on a printed circuit board only as long as necessary to initiate the wave soldering process that will bond them permanently.

Ideally, the perfect adhesive curing system would offer these benefits:

The ability to dispense a wet adhesive, position parts and cure on-demand has been seen as the main advantage of radiation curing adhesives. IR is the best choice because, unlike UV curing systems that require UV transparent substrates, IR wavelengths penetrate silicon and many other visibly opaque substrates. In addition, the absorption of IR energy by the adherend (the material being bonded) creates a less thermally stressed bond than purely heating the adhesive only.

The raw materials used in adhesives such as epoxies absorb infrared energy very effectively in the mid IR region of the optical spectrum. This efficient infrared energy absorption creates internal molecular agitation that manifests itself as heat (this is similar to a microwave heating water). Heat raises the temperature of the adhesive to a threshold level that activates the thermal cure initiator and forces the polymerising reaction to begin. Continued and controlled application of more IR energy accelerates and completes the heat-curing reaction of these epoxies, thus hardening the epoxy. The final result is a rapidly cured epoxy.

If IR radiation could be focused directly on the adhesive in a spot curing process it would offer the best of both worlds. IR spot curing could then integrate into existing production lines, allowing the line to move much faster.

To be effective and attractive in a production environment, an IR spot curing system must provide a quick cure. Empirical testing indicates that it is possible to fully cure a 2mm diameter spot of heat curing epoxy in less than 60s by concentrating light energy in the mid IR bandwidth.

Figure 1 shows a simplified drawing of an IR spot system including the lamp and reflector that create the energy source; a shutter to control the amount of energy being transmitted; a light guide (optical fibre) that transports the IR energy; and the lens that focuses energy on the adhesive spot.

Although there have been technical challenges associated with each of the system’s components, by far the most daunting was providing a means of transporting high levels of IR energy from the source to the adhesive spot. Traditional silica fibres were not an option as they simply do not transmit mid IR radiation.

As a result of many years of research and development an optical fibre was developed to transmit this radiation. The fibre used to deliver the mid IR energy is very flexible, highly transparent in the infrared range and capable of resisting very high optical fluences. Figure 2 illustrates a typical transmission graph of IRphotonics’ Infrared Fibre.

The second challenge involved the light source. It had to be cost-effective and produce the appropriate amount of light at the appropriate wavelengths. A custom-designed lamp emitting across a broad spectrum in a focused spot fit the bill.

Coupling the light source to the fibre cable transmission medium without excessive energy losses also presented a problem. The problem was one of light and heat management. It occurred because the high-intensity light source focused all of its energy on a single spot in space within a small mechanical enclosure. The location of this spot also required precise alignment of the fibre bundle so that it could effectively transmit all of the useful optical energy and not suffer from an excessive heat build-up. Ultimately, an elegant mechanical adapter design allowed the thermal and light management to be accomplished seamlessly.

Until recently, no single system met all the requirements of the ideal IR spot curing nor solved the challenges. The launch of IRphotonics’ iCure system in mid-2008, however, signalled a big step forward toward realising the perfect cure.

Results using modern infrared spot curing indicate a significant advantage over conventional ovens, so much so that some epoxy manufacturers are considering revising their product specifications to include IR spot curing as an alternative because it improves the value of their epoxy product lines. For example, the bonding time for some epoxies using conventional thermal curing that is now specified at 15min can be reduced to less than 60s with IRphotonics’ iCure spot curing system.

A summary of the characteristics of thermal ovens, UV spot curing and infrared spot curing is shown in Table 1.

So in addition to providing a fast, high-quality, in-line solution, a successful infrared spot curing system must have a small footprint and be designed to be flexible and operator-friendly. The entire package should be designed to be integrated into a range of processing equipment categories, including those in which curing is automatic, semi-automatic or manual.

IRphotonics’ iCure AS200 system is a 9lbs (4kg), 13in x 7.1in x 7.9in (33cm x 18cm x 20cm) desktop product that can be used in manual operating mode for process development but can also be rack-mounted horizontally. Its self-orienting display makes it a good fit for automatic or semi-automatic curing as part of robotic systems.

The system is programmed using a touch-screen display that is particularly well suited for a production environment. Technicians can display parameters such as relative radiation intensity and exposure times easily and accurately. An on-board microprocessor monitors system performance and provides a flexible, user-friendly interface with a range of reporting features.

Curing is, of course, the most important function. Precise curing profiles are essential to producing a high-quality bond in the least amount of time. Since optimal profiles vary with the adhesive used and environmental conditions, IRphotonics offers customers the value of in-house applications consultations to create these profiles. iCure’s programmable software system has been designed to save a variety of curing profiles in non-volatile memory within the unit.

In addition to spot curing of thermal epoxies, the iCure AS200 is also well suited for the localised heat welding of thermoplastics and as a source of focused energy for micro-soldering.

Speed and bond quality are the two primary characteristics for judging the value of systems for spot curing engineering adhesives. While the advantages of using infrared radiation as heat source have been well known for years, technical problems such as the lack of industrial grade optical fibres that transmit infrared energy prevented a competitive system from entering the market.

Innovative technologies pioneered by IRphotonics solved the problems and have paved the way to a new generation of small, lightweight, infrared spot curing systems that operate as an in-line process and produce high-quality epoxy bonds in a fraction of the time required before. The iCure AS200 provides all the flexibility, quality and speed required to redefine the market for spot curing of engineering adhesives.

How advancing tech has shaped mental health in 2022