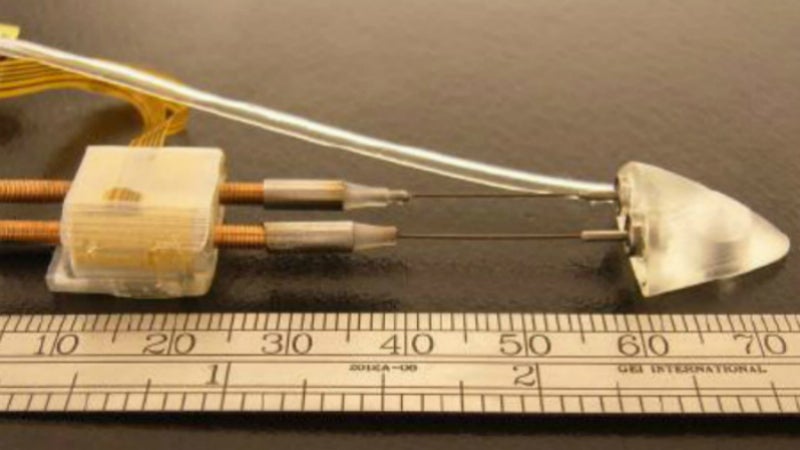 This study describes the development and construction of a mobile robot driven by miniature ultrasonic piezoelectric motors for minimally invasive cardiac therapy. The robot design extends upon previous prototypes of HeartLander, a miniature mobile robot that moves in an inchworm-like fashion. Construction of the system included motor selection, body design and development of the control system.

The robotic design was developed as a proof of concept to demonstrate mobility on the cardiac surface. This paper presents the design of the robotic platform and preliminary testing results in vitro. The development of the robot allows for increased turning capability and higher traction during locomotion, and represents the first step in designing a wireless mobile robot for cardiac therapy.

Minimally invasive surgery decreases recovery time by using access techniques that are inherently less traumatic to the patient. Robotic teleoperated surgical systems, such as the da Vinci (Intuitive Surgical, Sunnydale, CA), feature endoscopic tools equipped with end-effectors that mimic the movements of the surgeon’s hands. These systems are useful in certain procedures; however, they have difficulty reaching posterior areas of the heart, require deflation of the left lung and necessitate multiple incisions for the endoscopic tools [1].

The HeartLander robot presents an alternative solution to some of the problems surrounding robotic minimally invasive cardiac techniques [2]. This miniature tandem-bodied mobile robot travels on the heart surface, or epicardium, by alternating suction and the extension length between two bodies. Using this inchworm-like locomotion, HeartLander can reach any targeted location on the beating heart surface.

Because the robot adheres to the beating heart, it is naturally located in the same moving reference frame. This passive stabilization avoids cardiopulmonary bypass or tissue stabilizers, which may cause electrophysiological damage [1]. Upon reaching the target, the surgeon uses a therapeutic endeffector located onboard the robot to perform the intervention. HeartLander only requires a single small subxiphoid incision for placement onto the heart. Due to this placement technique, general anesthesia and lung deflation are not required, thus reducing patient recovery time and opening outpatient possibilities.

Despite the effectiveness of the current HeartLander prototype, some problems still exist. The tether consists of several components, including the drive-wire mechanism that allows for the extension and retraction motions of the robot. This mechanism, in combination with the other components, increases the stiffness of the tether. As the robot attempts to turn, the tether pulls the robot back toward its original heading orientation, causing a loss of traction and locomotion efficiency. Furthermore, tether stiffness causes difficulty when moving across areas of the heart with high curvature. The inability to turn effectively limits the potential of HeartLander as an access device for cardiac therapy.

The HeartLander OMNI (onboard motor navigational instrument) has been developed to reduce tether stiffness, thereby increasing turning ability and locomotion efficiency. The goal of the design is to reduce tether stiffness by utilizing small onboard motors, which would result in more efficient turning capability by eliminating the drive-wire mechanism from the tether of the robot. The HeartLander OMNI design is based on previous HeartLander prototypes and, therefore, utilizes a similar locomotion technique.

Furthermore, the motors have no gears or cams, which allows for smaller construction and more efficient operation as a linear actuator. Because the motors advance a threaded rod, step length is limited only by the length of the rod. The motors use a flexible printed circuit board for power and communication with motor control circuitry located in an offboard enclosure.

2. Body Design: The design of the front body of the robot is sloped to a point. The purpose of the front body is to create a virtual space underneath the pericardium, the sac of fibrous and serous tissue surrounding the heart, as it is advanced by the motors. The front body contains two ball bearings to provide passive rotational degrees of freedom for the linear motors, and a port for therapeutic tools. The rear body accommodates two Squiggle 3.4-SQL linear motors, placed horizontally side-by-side. Each threaded rod has an attached length of nitinol wire. The nitinol wire connects to the miniature ball bearings on the rear portion of the front body.

3. Control: In order to generate locomotion, suction must be alternated between the two bodies, and the motors must be controlled. Two Tygon suction lines supply the chambers with vacuum pressure from an offboard pump. The suction activation of each chamber is regulated by a solenoid valve. A graphical user interface manages all of the robotic functions, including motor controls and the alternation of suction between the two bodies. The program allows the robot to be controlled using the arrow keys of a computer keyboard. The program also allows the physician to modify several parameters of the robotic locomotion, including step length and number of steps, thus providing control over the robotic movement.

Qualitative criteria were used as a preliminary evaluation of the robotic design. Forward locomotion and turning were performed on smooth flat surfaces, and on a plastic beating heart model with a synthetic pericardium. Moving and turning on smooth flat surfaces proved effective. The robot moved and turned quickly and easily on these surfaces. On the beating heart model, some effectiveness was demonstrated.

The robot was capable of extending the front body forward and retracting the back body, as well as performing turning motions underneath the pericardium. The curved surface presented some difficulty in terms of maintaining contact to create a suction seal, specifically for the rear body. The vacuum pressure was approximately 400mmHg when suction was applied to the surface. The average step length during testing on a flat surface was measured to be 8.3mm (10mm optimal). This resulted in 83% locomotive efficiency.

The concept of developing a miniature onboard motorized robotic surgical device capable of exhibiting motion was illustrated on flat surfaces and, in a more limited fashion, on a plastic heart model underneath a pericardium. Improvements can be made to the HeartLander redesign, specifically regarding further miniaturization. A decrease in height would result in a decrease in friction between the robot and the heart surface. A decrease in length would reduce the negative effect of the heart’s curvature on the robot’s prehension of the surface.

The application of a hydrophilic coating to the robot would allow for increased lubricity, and is another option to reduce friction. Miniature Hall effect sensors could be added to the design to incorporate closed loop control. Pressure sensors could be added to detect loss of suction seal with the surface. Future testing will include in vivo porcine testing on a beating heart.

In addition to improving maneuverability, the HeartLander OMNI represents the first step in developing a wireless miniature robotic surgical system. Such a robot would require a substantial number of improvements, while maintaining dimensions that allow it to operate in the confines underneath the pericardium. Improvements would require smaller motors that could operate on a power supply also contained within the robot. An onboard prehension source would also be required.