In Association with MicroCare Medical

Additive manufacturing (AM), also known as 3D printing, is gaining momentum in the medical device manufacturing industry. As the process becomes faster, more stable and more affordable, it is a sound alternative to other more traditional machining methods like electrical discharge machining (EDM) and abrasive waterjet or turning and milling.

Building simple tooling items like fixtures and jigs is one of the most common uses for AM within the medical device manufacturing industry. But AM is also used for small-volume runs of very complex parts such as intricate surgical instruments or to fabricate highly customised pre-surgical models and guides. It is also a natural fit when it comes to making customised biomedical devices such as dental implants, hearing aids, contact lenses, personalised orthotics and prosthetic limbs for individual patients.

In addition, AM appeals to device makers concerned about intellectual property security. Because AM typically occurs in-house, device engineers never publicly share their designs with mould makers, die creators or other outside service providers. Everything is managed internally, which helps protect patents, trademarks and other sensitive information.

There are many types of metal 3D printing methods used today, but many engineers choose binder jetting (BDJ) for their parts. BDJ is typically less expensive, faster and easier to use than other AM methods. Binder jetting builds a part out of a feedstock made up of fine metal powders and binders. It deposits alternating layers of metal powder and binders in thin horizontally progressive layers until a part reaches its final shape.

Solvent debinding is gaining popularity in the medical device manufacturing industry because of its efficiencies and environmental advantages. 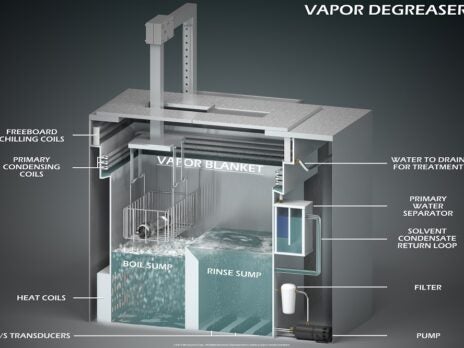 The powdered metals include medical-grade stainless steel, titanium and other alloys to produce high-performance precision parts that meet both US Food and Drug Administration (FDA) regulations and customers’ exacting standards.

Binders are usually wax, stearic acid or polymers such as polyethylene or polypropylene. The binders hold the powdered metals together to build ‘green’ parts using the AM layering process.

The binders help form the metal powder into a specific shape, but they are only temporary. The green parts are debound before they are sintered. During debinding, some, but not all, of the binders are selectively removed. Only enough binder stays behind to help the parts keep their structural integrity. Successful part debinding is a fine balance of selectively removing the right amount of binder as quickly as possible without damaging the fragile parts.

The pars are then thermally sintered at near melting temperature. This burns off any remaining binders and bonds the metal powder to its solid mass state, typically 96-99.8% density. The parts are then post-processed using standard finishing techniques like sanding, painting or coating.

Part debinding is usually done using one of four methods, namely thermal, catalytic, aqueous or solvent debinding. Each of these methods has its pros and cons, but solvent debinding inside a vapour degreaser is gaining popularity because of its operational efficiencies and environmental advantages.

Aqueous debinding: Some part fabricators choose to use water-soluble binders because they think it is better for the environment, but what they don’t consider is the extra time, water and power consumption needed to rinse and dry the parts. In addition, after debinding, the wastewater must be filtered and prepped for proper disposal.

The low-boiling debinding fluid melts the wax binder. It also creates porosity or channels within the green part that allows the fluid to evaporate quickly before sintering. A typical debinding cycle takes 6-20 minutes, but the parts come out dry cool enough to immediately transfer to the sintering oven. This translates into shorter debinding cycles and faster production runs overall.

Solvent-based debinding fluids are hostile to bioburden and don’t harbour pyrogens.  They do not use water, which helps maintain an environment free of bacteria, viruses or other pathogens and provides a convenient way to validate a cleanroom compatible, bioburden-free debinding process.

The vapour degreaser debinding process, once established and tested, stays consistent with little variation. The debinding fluid stays stable and does not require daily monitoring or testing. This means easier compliance with your product and process qualification and validation specifications.

Vapour degreasers typically have a small footprint with a high output. This means lower overall operating costs in the expensive production or cleanroom floor space.  Vapour degreasers don’t generate dust, fumes, heat or moisture, so they do not require special blowers and fans or any special climate controls to maintain air quality or ambient temperature and humidity.

Better for the environment

Modern debinding fluids used inside the vapour degreaser are recycled and reused for hundreds of hours before it needs refreshing or replacement. The vapour degreaser concentrates the binders and other contaminants, minimising the amount, frequency and cost of your hazardous waste disposal.

Solvent debinding happens at a very low-boiling temperature that still melts the wax binders but does not damage the non-soluble fragile parts. It also reduces energy consumption and cost.

Debinding fluid is an important tool for successful AM manufacturing. If you are looking for help choosing the right debinding fluid or method, schedule a consultation with one of our Applications Specialists today. They can recommend which debinding methods and fluids will work best.

Jay Tourigny is senior vice-president at MicroCare Medical, which offers medical device cleaning and lubricating solutions. He has been in the industry for more than 30 years and holds numerous US patents for cleaning-related products that are used on a daily basis in medical and precision cleaning applications. For more information, visit MicroCare’s company profile.