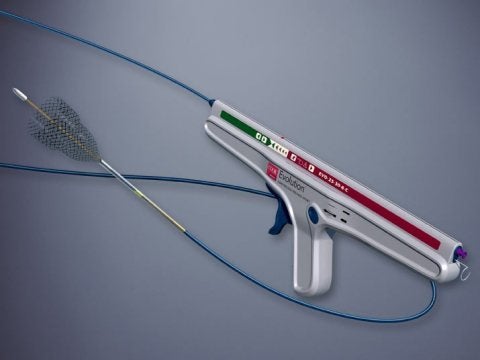 The Evolution stent features a delivery system utilising kink-resistant Flexor technology for pushability and stability, as well as a visible endoscopic marker to define the proximal end of the stent.

The approval was based on a recent international, multicentre study of 80 patients, which was designed to demonstrate the safety and efficacy of the Evolution stent in reducing symptoms, as well as acting as a bridge to surgery.

“The new stent is used to reduce pain and uncomfortable symptoms associated with colonic obstructions.”

The first post-procedure report revealed that 85% of patients in both groups had mild or no symptoms of abdominal pain, no difficulty in defecating or constipation, no adverse events associated with device malfunction, as well as no deaths considered to be caused by a device complication.

“That can make it easier to place the stent the first time around, potentially reducing the need for repeat procedures, while increasing efficiency in the GI unit.”

The company said that the Evolution colonic stent, which is now available to select physicians across the US, will be widely available in the coming months.