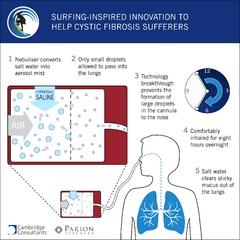 Pharmaceutical company Parion Sciences and product development firm Cambridge Consultants have jointly developed a new surfing-inspired aerosol delivery system that can help people suffering with cystic fibrosis to get the benefits of saltwater treatment in their homes.

After observing surfers with cystic fibrosis (CF), scientists found that the inhaled mist of seawater has a therapeutic effect on the lung problems associated with the disease.

After assessment in a clinical trial, the trans-nasal pulmonary aerosol delivery device is claimed to have exceeded its predicted performance, and now additional devices have been called for in order to support more clinical trials.

Parion co-founder and chairman Dr Richard Boucher said they have seen evidence that routine exposure to saltwater reduces the number of lung infections in CF patients and leads to fewer hospital admissions, but the challenge was to develop an optimal delivery system.

“We enlisted Cambridge Consultants to design the system, given its track record of creating world firsts in drug delivery device development – and the results have exceeded our expectations,” Boucher added.

The new nebuliser allows people suffering with CF to enjoy the benefits of saltwater treatment in their homes overnight while they sleep.

More than 70,000 adults and children across the world are suffering with this chronic disease, which negatively affects the lungs and digestive system.

Several studies have indicated that inhaling the hypertonic saltwater solution alleviates the condition in CF patients as it rehydrates the layer of mucus film that lines the lungs.

Besides conducting human-factor studies, Cambridge Consultants also applied its expertise in fluid dynamics to develop a system that could continuously deliver an aerosol mist through the nose for eight hours.

Cambridge Consultants programme director Matthew Allen said that they recognised the potential of the project to help CF patients.

“The challenge was to build an aerosol nebuliser system that could be comfortably used by patients overnight – with the saline mist travelling down a long cannula to the sleeping patient without forming the large droplets that often occur in a standard nebuliser system.

“The size of the saline droplets is crucial to the success of the treatment as they need to be small enough to penetrate deep into the lungs,” Allen added.

The aim of the device is to offer an effective treatment system for CF patients including young children.