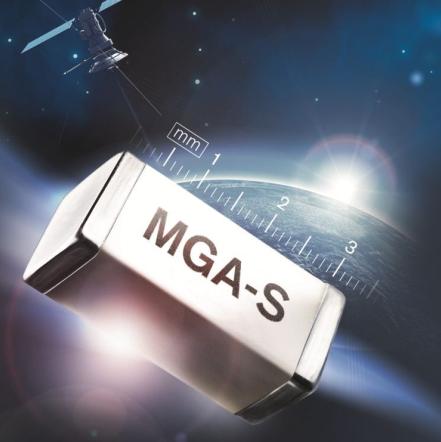 With its MGA-S fuse for aerospace applications, SCHURTER has proven the company’s innovative power and flexibility, and this effort has been rewarded with this year’s IHZ Innovation Award.

Even though a fuse is a critical component, it often plays an underappreciated role in the background. This is certainly not the case for the MGA Space fuse, though, for which SCHURTER this year was pleased to accept the Innovation Award of the Central Switzerland Chamber of Industry and Commerce (IHZ).

This award is the first and oldest corporate prize in Central Switzerland, one more steeped in tradition than any other. It is presented annually for unique and innovative products, services or processes.

The MGA-S is used in aerospace applications and thus must meet very stringent requirements. It is based on the proven MGA fuse, which has proven itself time and again in commercial applications, but SCHURTER has taken its development a step ahead to make it suitable for space flight.

Doing so required new, innovative processes in both manufacturing and quality assurance. For space flight, the fuse must be totally sealed while also being temperature resistant and able to function in a vacuum. In addition, it must operate very fast and precisely while withstanding strong forces and vibrations. In addition, test procedures present a major challenge: proof must be provided that the fuse functions 100% of the time without it being destroyed, as is common when a standard fuse blows.

The IHZ jury was impressed not only by further developing a conventional fuse to make it suitable for aerospace applications but also by the certification by the European Space Agency (ESA). The result is that SCHURTER is the only European manufacturer whose fuses meet its strict requirements. The MGA-S is used today as a passive protective component in ESA satellites as well as those of the China Academy of Space Technology (CAST).

With the MGA-S, SCHURTER has firmly established itself in the aerospace sector as a high-quality supplier and a reliable partner. The demanding processes and production methods help keep Lucerne attractive as a place to do business and in this way retain important jobs in Central Switzerland. SCHURTER is already collaborating with the ESA to extend the MGA-S line for higher rated currents.

The IHZ Innovation Award, sponsored by Luzerner Kantonalbank AG and UBS in Central Switzerland, will be formally awarded for the 27th time on 12 December 2013. The expert jury selected the submission from SCHURTER from a total of 22 projects. The criteria used to evaluate them places emphasis on originality, the degree of innovation, market potential and success, the impact on Central Switzerland, corporate achievements plus benefits for society and the environment.

Ralph Müller is announced as new CEO of SCHURTER Group

SCHURTER is proud to announce that Ralph Müller will be the new CEO of SCHURTER...

SCHURTER has expanded its range of FMBC NEO 3-phase filters with a low leakage current...