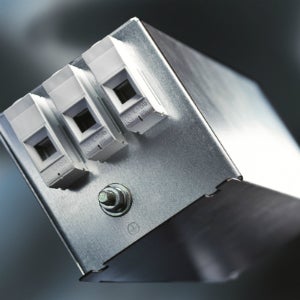 SCHURTER has expanded its range of FMBC NEO 3-phase filters with a low leakage current series for applications when no high leakage currents are allowed.

Electrical industrial installations are increasingly fitted with residual current devices (RCD) to ensure efficient personal protection; a requirement in countries for 3-phase systems, including plug-in systems of up to 32A.

RCD limits the current to earth to a maximum of 30mA. This poses a problem for drive technology, since frequency inverters controlling the engine generate considerable leakage current.

Long motor cables cause problems by increasing the capacity to earth, as well as the currents to earth. FMBC LL filters help to reduce the leakage currents and comply with common electromagnetic compatibility (EMC) standards as an efficient input filter.

The filters are compact, lightweight and designed for currents from 7A to 180A at an ambient temperature of 50°C. They have Underwriters Laboratories (UL) approval for ambient temperatures of up to 50°C and up to 40°C at a higher rated current.

FMBC LL is approved for rated voltages of 520 VAC, which means they can be used in high-power systems, such as machines used in an industrial environment.

A standard FMBC LL is fitted with a screw connection, with other connections including wires or copper bars available on request. Customised modifications to the circuit or housing are also available. SCHURTER offers its own EMC measuring service for an optimum adjustment to the inverter.

Ralph Müller is announced as new CEO of SCHURTER Group

SCHURTER is proud to announce that Ralph Müller will be the new CEO of SCHURTER...