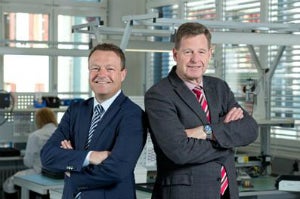 SCHURTER is proud to announce that Ralph Müller will be the new CEO of SCHURTER Group.

Mr Müller is taking over from previous CEO Hans-Rudolf Schurter, who successfully held the position for nearly 30 years.

Mr Schurter is stepping down from operational activities due to his age, but will retain his extensive expertise in his role as chairman of the board.

Mr Müller’s new position is the first time in more than 80 years of company history that operative management of SCHURTER has been handed over to a non-family member.

The successor of Ralph Müller is new CEO of SCHURTER Switzerland Christian Holzgang.

Ralph Müller began his career with an apprenticeship as a mechanic, studying at the technical college of Zurich for a degree in mechanical engineering and post-graduate studies, which lead to a degree in business administration and an executive MBA.

In 2014, he studied management in-depth at Stanford University in California. From 1990-2003, he worked in various roles, gaining extensive experience in general management and directing the production of electronic components.

In 2004, Mr Müller joined the SCHURTER family as head of production and five years ago, took over executive management as CEO of SCHURTER in Lucerne. Since 2012, he also headed up division components.

SCHURTER has expanded its range of FMBC NEO 3-phase filters with a low leakage current...