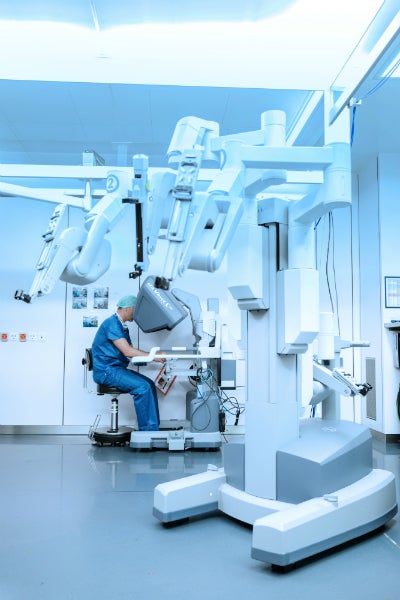 With 39 DC motors by Maxon Motors, the da Vinvi robot is carrying out an ever increasing number of surgeries.

At first glance, it may seem surprising as a urologist sits in front of a console operating joysticks in both hands, eyes fixed on a computer screen. However, he isn’t in it for the fun. Every small movement is vitally important, because Daniel Seiler is in the operating room of the Zürich Hirslanden clinic, where he controls da Vinci surgical robot from a few metres away.

The robot’s four arms are equipped with instruments such as a forceps and miniature scissors, as well as a camera. The instruments are inserted into the patient’s abdomen through small cuts, 8mm to 12mm in length.

In near silence and with extreme precision, Dr. Seiler controls the robot to remove a cancerous prostate gland. State-of-the-art technology has made this routine.

As with any surgery, there is no guarantee everything will go well. Daniel Seiler is not unaware of this. However, he has seen the da Vinci robot provide huge advances, especially in urology. In over ten years, he has carried out several hundred operations using the robot.

Seiler says: "At the beginning, there were critics who doubted the usefulness of such a system. However, almost all of them are silent now."

US company Intuitive Surgical introduced the robot to the market 14 years ago. Since, it has been used in more than 1.5 million operations, half a million in 2013 alone.

Daniel Seiler compares the robot to a sports car, it takes a good driver to control it and get fast lap times. Accordingly, it took several years for the surgeons to gain necessary experience.

Seiler says: "Today we are able to take full advantage of all the benefits of the da Vinci system"

The precision of the da Vinci system is no coincidence. Maxon’s DC motors ensure accurate transmission of the operator’s movements to the instruments. The robot has a total of 39 DC motors, which include 40mm and 13mm motors from the RE family and 29mm from the RE-Max family, as well as Maxon planetary gearheads and encoders.

One special feature of this application is the motors process both input and output signals. Some drives are in the control console, where they forward operator movements as signals to the computer. From there, these signals are forwarded to the motors in the manipulators, which then move the arms.

Due to their ironless windings, the maxon motors have no cogging torque. As a result, they feature outstanding positional accuracy. Another advantage is the excellent dynamics, which make these drives perfect for applications such as the da Vinci surgical robot.

The robot is not only used in urology but also in gynecology, and increasingly in ear, nose, and throat surgery. It has even been used in cardiovascular bypass surgery.

Daniel Seiler says: "The possible applications of this system are almost endless".