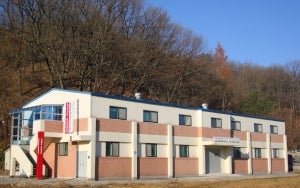 Starting January 11, 2013 maxon motor manufacturing will be producing the first brush-less DC motors in Korea. The new production site will strengthen the range of services in all East Asian countries.

A cornerstone for the activities of the maxon motor group in Korea was laid in 2007 at the maxon motor Service Centre in Seoul. The new production site in Sejong City was built by local engineers who were supported by production and development experts from maxon’s Swiss headquarters. Since January 11, brushless DC motors EC-i 40 are now produced at the new site. The EC-i 40, with a diameter of 40 milli-meters, is designed for an output up to 70 watts and is characterised by its high torque.

"The maxon motor group expands to Asia with its fourth manufacturing company after Switzerland, Ger-many and Hungary. The production of brushless DC motors EC-i 40 in Korea is part of our long term growth strategy for Asia", says Eugen Elmiger, CEO of the maxon motor group. He adds; "In Korea we find a large pool of highly experienced people and we expect that our proven production technology and our strength in innovation will be effectively integrated and developed at this location. This is an important step for the maintenance of our competitive position and a major element in the worldwide customer service network."

Howard Sul, president of maxon motor manufacturing Co., Ltd. says; "The production and development of maxon motors is a valuable contribution to the existing Korean market. At the production site in Sejong we will continuously pursue and develop new technologies to ensure we achieve the highest product quality. We were able to rely on the full support of the Swiss headquarters during the installation of our production site and we are looking forward to providing a superior and fast service for our customers in Korea and the East Asian region."