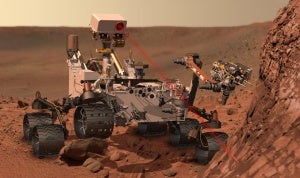 The landing of the Mars rover Curiosity took seven exciting minutes. Now it will be looking for signs of life on the Red Planet. maxon encoder technology will pay a part in the successful excursion of the rover. This is the continuation of the success story of maxon products in outer space and on far away planets.

The new Mars rover Curiosity ended its six-month long journey to Mars with a successful landing on 6 August 2012. As everything went according to plan, the control center at Jet Propulsion Laboratory (JPL, California) erupted in cheers. "It was a wonderful landing, everything looked extremely good," said NASA engineer and lead scientist of the JPL landing team, Adam Steltzner, enthusiastically at a press conference.

This is the start of a new, exciting excursion on the Red Planet. In contrast to the rovers Opportunity and Spirit, Curiosity can travel further distances on its six wheels and run longer without solar energy as a radionuclide battery gives energy for years. The plan is for the rover to spend two years exploring the immense Gale Crater on Mars for signs of life. This is with impressive equipment on board; a gas chromatograph will hopefully uncover organic compounds, a spectrometer will analyse the composition of rocks that will be collected by the 2m long robot arm and a neutron source will look for hydrogen in the ground.

"From Mars via the International Space Station to the moon"

On its "Mission to Mars" Curiosity also has maxon products on-board. The MR Encoder technology is built into the electromechanic joints of the rover. The magnetic sensors are mounted on the drive shafts and are responsible for controlling the motors. maxon development services for the drive systems have also played a part in the 900kg rover being able to carry out its Mars Mission successfully. Curiosity’s little brother Opportunity is still on its journey on Mars; for the past eight years the rover has been exploring Mars with the help of maxon motor.

A further success for maxon motor is the SpaceX Mission to the International Space Station (ISS). Among other things, brushless EC motors have been used to move the two solar panels which always have to be facing the sun in order to supply the Dragon Capsule with power. More flights to the ISS are already planned; the next in September 2012. In 2015 a further rover will be sent to explore Mars for the Exomars Mission.

The moon is also in sight – at least for the Chinese Lunar Exploration Program (CLEP) when an exploration rover will be sent to the moon. Numerous research satellites nearer to Earth will also be fitted with maxon drives. The next start of such a satellite is the ESA Sentinel 3 that will fly into space in 2013. Here maxon motors will be used, for example, in a possible emergency to control and secure the fuel valves.