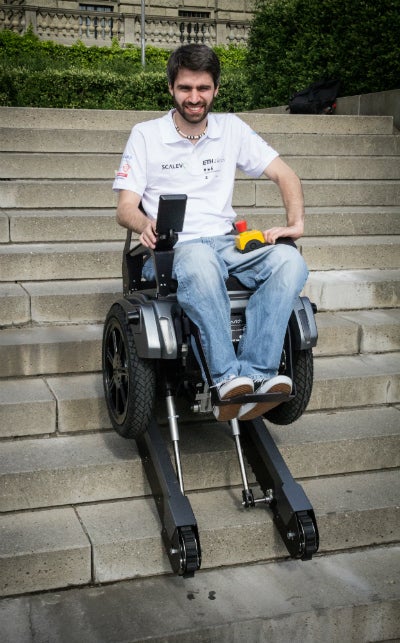 Test driven by Raffael, the Scalevo Wheelchair was developed by ETH Zurich Students to be able to drive up a flight of stairs using caterpillars.

While testing the prototype, Raffael smiles and comments that it feels like he is floating. At the top, the system self-balances and continues on two wheels.

ETH Zurich is working to bring it to market in the near future. For many people with walking disabilities, everyday life is filled with barriers, such as circumventing curbs and stairs. Ten Swiss students want to change that, so in the future no obstacle will prevent the freedom of movement for wheelchair users.

The engineers developed this new wheelchair in only a year; a masterpiece, which took up practically every free minute of the students’ time. But it was all worth it.

The first feedback received from people with walking disabilities all over the world was positive. Machine engineer Carlos Gomes says "many want to purchase our wheelchair already".

Originally, Gomes and his colleagues only wanted to build a robot that could climb stairs. But their professor encouraged them to go a step further, so the eight engineers started to develop the stair-climbing wheelchair in the summer of 2014. It had to be very maneuvera-ble, easy to operate, attractive, and safe.

The basic principle was that during normal operation, the wheelchair should drive on two wheels similar to a Segway. They planned to overcome the stairs with caterpillars, which can be extended and retracted. Scalevo unites the two motion principles into one hybrid chair.

To use the chair, the user approaches a set of stairs and selects the appropriate function on the touch screen. With sensors and cameras, the chair measures the incline of the stairs and automatically drives up to them in reverse. The caterpillars lower and start to turn, moving the chair up the stairs at speeds of one step per second. The driver stays in a straight position the entire time.

As soon as the sensors detect the end of the stairs, the stabilising wheels move into posi-tion, preventing the wheelchair from tipping over. The caterpillars then lift up and the wheelchair continues the journey on two wheels.
The wheels and caterpillars are equipped with two maxon electric motors, which act as drives. Brushless DC motors are used in combination with ceramic gearheads. Ceramic is always a good choice when high forces act on the components, yet the gearhead has to be very durable.

Carlos Gomes and his team are enthusiastic about the drives maxon provided to them, saying: "The motor-gearhead combination is strong, precise, quiet, and relatively light at 3.2 kilograms. Gomes added: "The maxon engineers gave us expert advice and the sup-port was excellent."

The students are very satisfied with their work. Gomes says: "Good teamwork was the key to our success".

In addition, they implemented the suggestions of many people with walking disabilities. Suggestions included adding a belt or inclining the seat backward slightly so the wheel-chair user did not slip forward. Gomes added: "We would never have thought of such details ourselves."

There is still much to be done, even though the project could be considered finished. The suspension of the caterpillars has to be made stiffer, the operation more intuitive, and the reliability has to be increased.