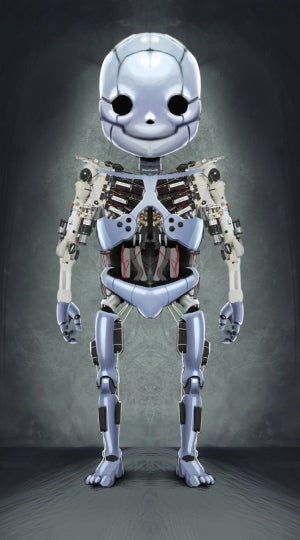 A project team with experts from science and industry, including the drive specialist maxon motor, is developing a new humanoid robot: "Roboy". On 9 March 2013, "Roboy" will be presented to the public at the "Robots on Tour" international robotics fair that will take place in Zurich as part of the 25th anniversary of the Artificial Intelligence Laboratory (AI Lab) of the University of Zurich. This development can now be followed and supported.

Since June 2012, the project team has been busy implementing the latest knowledge in the field of robotics to create a new humanoid robot. "Roboy" will be 1.3m tall, with an anatomy and motion characteristics that mimic that of humans. With "Roboy", the project team wants to show what topics are being researched in the field of robotics and which technologies are ready for series production.

"Roboy" is a further development of the technology used in the famous "ECCE Robot". Both "ECCE Robot" and "Roboy" are equipped with tendon-controlled drive technology, which gives the robots the ability to perform humanoid movements and to
react to their environment.

"Because robots physically move within their environment, completely new types of interaction between humans and machines result, far beyond what is possible with customary information technology such as laptops or smartphones," said Professor Rolf Pfeifer, initiator of the ambitious project.

"The development of "Roboy" can be shaped and supported by everybody," Pfeifer added. To make "Roboy" a reality by March 2013, the researchers need the support of partners and robotics fans. At www.roboy.org, everybody can take part.

In addition to the scientists of the AI Lab, international research groups from Germany and Japan are participating in the project. Furthermore, it has the support of partner companies that are providing cutting-edge Swiss high-tech expertise. As main project partner, maxon motor is supplying numerous DC and EC motors, as well as sensors that enable "Roboy" to make high-precision movements.

The drive specialist from Sachseln has many years of experience in robotics for medical technology, industrial automation and the astronautics industry. Currently maxon products are in use in the two Mars rovers; "Curiosity" and "Opportunity".

"Highprecision electric motors are the artificial muscles of a robot. Our drives are small, dynamic and efficient – just what robotics need," said Eugen Elmiger, CEO of maxon motor. Drive systems from Obwalden already powered the movements of the "ECCE Robot". "For us, creative and ambitious projects such as "Roboy" are always an incentive to challenge ourselves and to try new things," added Elmiger.

The know-how generated as part of the "Roboy" project is freely available to researchers, robotics fans and people who are interested in technology. Pfeifer said; "With "Roboy", we are defining a new development platform for humanoid robots that can and should be used and further developed by everybody!"