The Final Spurt: In Two Months, Roboy Will Be Brought to Life 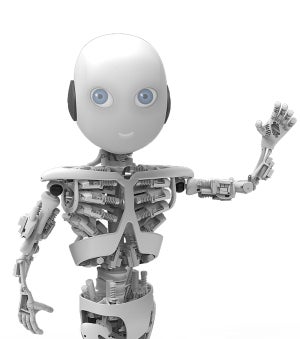 Roboy has a bright future, as he represents a completely new generation of robots. The pioneering project of the Artificial Intelligence Laboratory (AI Lab) of the University of Zurich started six months ago, with the target of developing one of the most modern humanoid robots within nine months. Now the robot is getting a new face and can already move his arms. On 9 March, 2013, Roboy will be presented to the public at the ‘Robots on Tour’ robotics exhibition held in Zurich on the occasion of the 25th anniversary of the laboratory.

Since the project start in the summer of 2012, Roboy’s development has progressed very far. The torso of the 1.3m robot has been completed and assembled. The two arms are finished and can move; furthermore Roboy has now received a new face. This friendly face is projected onto the head of the robot with a miniature projector and gives him a whole range of facial expressions. This makes his humanlike appearance almost perfect. Roboy will additionally be able to recognise faces that he has learned beforehand. The humanoid is a so-called ‘soft robot’ – a further development of ‘Ecce’, his famous brother, which was also driven by maxon products. Roboy has been designed as a humanoid tendon-controlled robot (in ‘normal robots’, the motors are in the joints); this will enable him to move almost as elegantly as a human.

More than 50 high-precision motors and an accurate controller

As main project partner, maxon motor supplies various brushless DC drives that provide Roboy with controlled movement. In total, more than 50 maxon motors, combined with gearheads and encoders, have been installed in the robot. Additionally, all electronic components are from maxon motor. To control the motors and execute Roboy’s movements, a master / slave system has been set up using the digital positioning controllers of the maxon EPOS2 series. Programming of the control functions on the slave system was performed in cooperation with maxon engineers. The drive specialist from Sachseln has many years of experience in robotics, e.g. for medical technology, industrial automation or the astronautics industry. Currently maxon products are in use in the two Mars rovers ‘Curiosity’ and ‘Opportunity’.

On occasion of the 25th anniversary of the AI Lab, robotics fans, robots and cyborgs from all over the world are coming to Zurich for the ‘Robots on Tour’ (robotsontour.com) world congress. In addition to getting to know Roboy, who will be presented at the maxon motor stand, the visitors will get a chance to shake hands with Affeto from Osaka and Kibo, Silbot and Mere from Korea, among other attractions. The topic of robotics will be presented to the public in many demonstrations and shows. RoboSoccer will play soccer, quadrocopters will present an airshow and a robotic theater drama will be performed. A focal topic is the relationship between humans and robots and the questions that arise from it. What potential does robotics hold for mankind? What dependencies could result? There will be lots of opportunity for scientific exchange in the podium discussions with renowned researchers such as Rodney Brooks, former director of MIT CSAIL (Computer Science and Artificial Intelligence Laboratory) and founder of ‘Rethink Robotics’.

Maxon motor is having a prize draw for a VIP weekend in Zurich, including tickets to attend the ‘Robots on Tour’ exhibition. Download the maxon motor magazine ‘driven’ onto your tablet PC (iOS, Android) and participate in the competition. For more information, go to: http://www.maxonmotor.ch/maxon/view/content/driven.