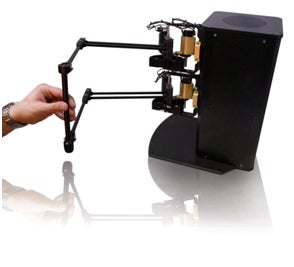 In an increasingly virtual world, the ability to simulate touch provides powerful advantages, for example allowing an online shopper to ‘feel’ a shirt fabric. Enter the discipline of haptics, which involves using robotics with sophisticated feedback and controls to simulate a tactile experience for the user. Haptic device manufacturer Quanser Consulting Inc., for example, produces five- and six-axis robots that supply crisp, realistic sensations. To do so, they leverage proprietary hardware and software, along with high-torque, high-bandwidth motors from MICROMO.

Quanser started out serving the educational market, with products such as surgical simulators that permit medical students to experience making incisions without the use of a cadaver. "You can simulate the whole procedure and have them feel the same sensations they would if they were doing the real thing," says Paul Karam, Quanser’s manager of dynamics & control. "You can also measure their performance – how much force did they apply, how much cutting did they do?"

In addition to application-specific products for OEM customers, Quanser builds general haptic devices for research. Their most recent design is the High Definition Haptic Device (HD²), a parallel mechanism with six degrees of freedom (x, y, z, roll, pitch, yaw). Formed of two five-bar linkages coupled together, the low-friction, mechanically balanced robot offers high resolution motion in a large workspace. The HD² offers ±90° of motion on roll and pitch and ±180° in yaw.

"Whatever you’re trying to simulate – it can be knocking on wood, it can be brain surgery – the haptics of it have to feel crisp and smooth," says Karam. "The mechanism has to be able to render the true feel of the surgery or it’s not beneficial."

An ideal haptics device exhibits low friction and low inertia while generating force with high dynamic range, all within a large work envelope. To achieve this, Quanser takes a mechatronics approach in their design, doing extensive modeling and testing in advance of prototyping to determine the best approach. To maximize responsiveness in the HD², for example, the engineering team located the motors in the housing rather than on the actuator arm itself.

Key to performance are Quanser’s linear current amplifiers. "You get very smooth, even forces around zero you can actually feel," says Karam. "You can’t do that with a pulse-width modulated (PWM) amplifier." The design team also avoids standard motion controllers. Generating the sensation of touching a hard surface or interacting with the environment requires very high bandwidth forces with negligible latency. The delays introduced by a standard motion controller are unacceptable. Instead, the engineering team leveraged Quanser’s eight-port data acquisition boards and proprietary controls software QuaRC. The result is a PC-based controller that operates at 1kHz to 10kHz, simultaneously reading the encoders, calculating the kinematics of the device, and generating torques on all six motors.

Part of mechatronic design is taking a systems-level approach to design, not just arbitrarily choosing components. "That’s where our collaborative work with MICROMO comes in," Karam says. "Using their high-end motors with our linear amplifiers, we’re getting motors that are capable of generating high output torque but at the same time very low friction and stiction, and very low perceived inertia. Coupling our technologies with MICROMO’s has brought our haptic devices to the forefront of the field."

The goal of the team was to standardize around one or two motors to maximize development efficiency. They needed high torque but higher torque generally implies a bigger motor with higher inertia, friction, and weight. The Quanser team worked with MICROMO engineers to find a specialized unit that met their needs exactly. "The windings on this motor were different so that it produced a very high output torque," says Karam. "It’s not very high-speed but haptic devices seldom need high-speed. Torque and the back drivability [ability for the user to overcome friction and manipulate the haptic device] are the important factors when choosing a motor." The MICROMO motor provided both; as a result, the not-so-standard motor has become Quanser’s go-to solution. "We regularly stock that motor in-house so even in new designs that’s the first one we try," Karam adds.

MICROMO fits the motors with high resolution optical encoders to provide the accurate feedback required to give a believable tactile experience. For some applications, they also integrate gearheads, but not in all cases. The problem is that gearheads can suffer from backlash, which introduces an unacceptable latency in the touch response of the device; thus, instead of gearheads, Quanser uses capstans. A capstan consists of two drums with a pre-stretched cable running between them, an arrangement something like that found in a video cassette. The relative diameter of one drum relative to the other provides the reduction ratio. A typical motor / capstan assembly can achieve reduction ratios as high as 30:1.

Of course, to be effective, haptic devices need to provide a consistent experience, which means the motors need to offer repeatability. Here, too, MICROMO came through. "The force that I generate is solely based on what I assume is the nominal torque constant of the motor," says Karam. "I don’t have a quantitative way of really measuring that from system to system but we’ve made many variations of the same device and I cannot tell the difference when I’m tracking."

Quanser continues to work with OEMs and researchers alike. With its design platform and MICROMO motors, the company can quickly and easily turn concept into product. "If a surgeon comes to us and says we want to study needle insertion in operating room, we can design a device that has the right specifications," Karam says. "We have a good working relationship with MICROMO where we consistently go to them for new products and new motors. We know how to interface easily with their motors and the encoder packages. There’s no reason we can’t work with them on future products endlessly."

And if haptics takes off as Karam and others anticipate, that may well be the case. "I don’t think we can fathom where haptics is going to go in, say, 20 years, and what will come out of it," he says. "I really believe eventually it can probably touch on every industry."