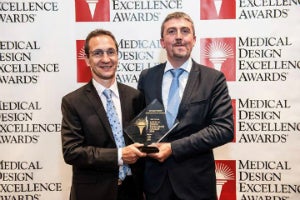 Selenium Medical is proud to announce they won the 2015 WorldStar packaging award for its double-sterile barrier packaging SoTube / SoSafe®.

Packs are evaluated by a jury in terms of performance, innovation, product protection, design, ergono¬mics, use, production, distribution and environmental impact.

The eligibility to compete at the WorldStar Awards is on the condition of a prerequisite victory for the packaging from another national or international competition recognised by the jury.

Both ceremonies were held in New York City in June, in conjunction with the MD&M, Eastpack and Pharmapack shows.

Selenium Medical also won the MEDTEC France Innovation Bronze Award. The company was invited to the Elysée Palace to meet the President of the French Republic.

Selenium Medical president Olivier Richart said: "I am now confident that these international awards will help us to be internationally recognized in the Medtech community worldwide and to establish our technology as a new ‘gold standard’ for implants packaging worldwide beside the pouches and blisters."

The CE Marked SoTube / SoSafe packaging, which was also approved by the Food and Drug Administration (FDA), offers an innovative solution for the aseptic and secure transfer of medical devices in the operating room.

Two plastic tubes of a biocompatible material, phthalate or latex free, are nested one inside the other, providing a 100% no touch application.

A real alternative to the traditional pouches and blisters, the dual tube is less bulky than traditional packaging and provides a unique visibility of the implant due to its transparent material.

Selenium Medical, Sponsor of the Young Duo of the Sailing Association TEAM TARANGAU

Team spirit, entrepreneurship, commitment, innovation and surpassing oneself are all values relayed by sailing.Because they...

To meet the business development and requirements of its customers, SELENIUM MEDICAL has implemented the...

In order to gather operating room nurses (IBODE) and ensure training, UNAIBODE set up the...