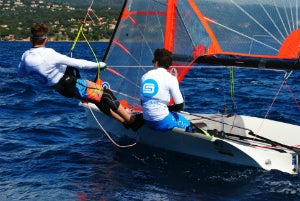 Team spirit, entrepreneurship, commitment, innovation and surpassing oneself are all values relayed by sailing.

Because they embody the company’s values, in 2015 Selenium Medical joined in with the adventure of TEAM TARANGAU composed of 16-year-old Louis CHAMBET, and Timothée DEPERY, 15.

The coach of TEAM TARANGAU said: "TEAM TARANGAU is a 1901 law association that aims to sail crews in the area of sailing regatta, providing organisational, material, logistical and human resources to competitors and crews competitors supported by the association.

"It was created in early 2015 during the surge of Louis and Timothée project. If this experience is successful, we will expand the association activities with other potential young crews, from different regions."

With a young and dynamic structure, Selenium Medical has wished to support this first duo.

This partnership plays an important role in strengthening our vision work as a team for our customers, our colleagues and our environment.

In 2015, Louis and Timothée objectives are :

To meet the business development and requirements of its customers, SELENIUM MEDICAL has implemented the...

In order to gather operating room nurses (IBODE) and ensure training, UNAIBODE set up the...

Selenium Medical has developed its own Type II anodising process following recommendations of the SE...